Exploring Karnak The Jewel of Thebes

From the Pyramids of Giza to the icons of Abu Simbel, Egypt boasts some of the world’s foremost historic wonders. Of the country’s many heritage highlights, few offer as spectacular a showcase as Thebes – a city which stands as a remarkable testimony to the complexities and nuances of civilisation in the Ancient Egyptian world.

A World Heritage-listed site since 1978, Thebes served as the capital of Egypt throughout the Middle and New Kingdoms, and was celebrated for its spectacular architecture. Karnak, a vast complex of temples and palaces, is without doubt one of Thebes’ most impressive structures, and remains the largest religious building ever constructed.

Tracing the legacy of Karnak is one of the great joys of visiting ancient Thebes, which is today located amid the bustling city of Luxor. Here, we’ll be exploring the history and highlights of this remarkable ancient icon, and introducing the ways you can experience it during a luxury escorted tour in Egypt from Scenic.

From the Pyramids of Giza to the icons of Abu Simbel, Egypt boasts some of the world’s foremost historic wonders. Of the country’s many heritage highlights, few offer as spectacular a showcase as Thebes – a city which stands as a remarkable testimony to the complexities and nuances of civilisation in the Ancient Egyptian world.

Unearthing the Legend of Karnak

The jewel in the crown of ancient Thebes; Karnak is a monumental temple complex, comprising temples, tombs, sanctuaries, obelisks, pylons and kiosks built from the Middle Kingdom to the Ptolemaic period in the timeline of Ancient Egypt. Developed, destroyed, rebuilt and renovated over 2,000 years, Karnak was used extensively by countless Pharaohs, making it one of the most culturally significant and inspiring buildings in Ancient Egyptian antiquity.

As well as being Thebes’ most architecturally-striking temple complexes, Karnak is also one of its biggest, covering an area of almost a square mile. The site is dominated by the great Temple of Amun-Ra, which, with its awe-inspiring Hypostyle Hall and forest of ancient pillars, remains the largest religious site in world history – an incredible feat, given it is over 3,000 years old.

While Karnak was a principal temple complex throughout much of the Middle and New Kingdoms in Egyptian history, the golden age of the site is associated with the dynasty of the great Theban Triad – a divine trio consisting of Amun, Mut and Khonsu. The Triad was beloved throughout the 18th-25th dynasties of the Middle and New Kingdoms, and much of the Karnak temple complex is dedicated to these three divine figures of the ancient world.

Monumental in every sense of the word, Karnak remains one of the most beloved heritage wonders of Egypt, attracting millions of curious visitors each year.

Here are some of our favourite facts about the site which emphasise its momentous size, scale and significance: The Avenue of Sphinxes forms the main thoroughfare into the Karnak temple complex; foretelling the dramatic heritage of the structures that lie within. During the Ancient Egyptian Festival of Opet, statues of the Theban Triad, including Amun, Mut and Khonsu, were carried down this mighty passageway all the way to the Temple of Luxor and back again. 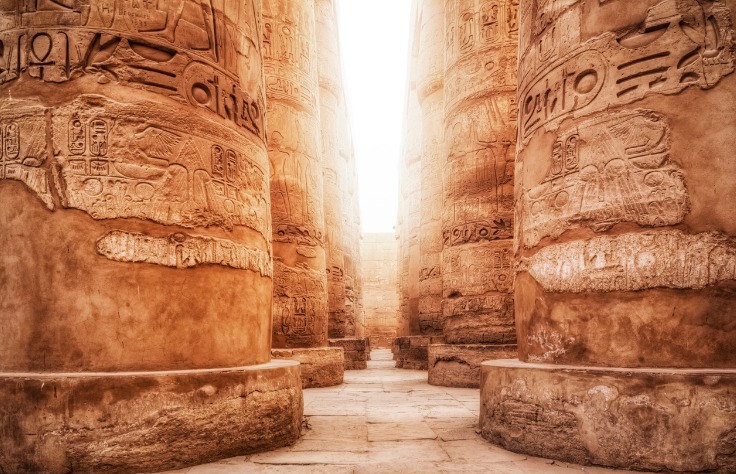 The Great Temple of Amun is the principal temple building within the Karnak complex, and boasts some of the site’s most iconic archaeological wonders – from the First Pylon to the Temple of Ramses III. Altered and developed by successive Egyptian Pharaohs, much of the temple that stands today was built by Pharaoh Thutmose I, who expanded it in line with the supposed power of Egypt’s influential God-Kings. A whole day could be spent exploring the highlights of this one temple alone, but don’t neglect to seek out some of Karnak’s other lesser-known gems. Lying just beyond the enclosing wall of the Temple of Amun lies the Sacred Lake, a vast body of water dug by Thutmose III between 1473-1458. Measuring 393x252 feet, the reservoir was the largest manmade lake of the era, and was used by the Pharaoh’s royal priests for ritual cleaning. Originally, the lake would have been surrounded by the storerooms and living quarters of the priests, as well as an aviary for storing aquatic birds, but these structures have barely survived. A short avenue of sphinxes leads to the Temple of Khonsu, one of the most iconic and widely-photographed of all Karnak’s ancient heritage sites. Built by Ramesses III, the temple pays homage to the child of Amun and Mut - Khonsu, the last of the Theban Triad. The most impressive aspect of the temple is the Gateway of Ptolemy III, which faces the Avenue of Sphinxes, and is one of the best-preserved structures in the complex. Perhaps the most fascinating aspect of the temple itself is the obvious mixture of different stones which were used during its construction – highlighting different periods of redevelopment and rebuilding.

Discover the Wonders of Karnak with Scenic

At Scenic, our luxury escorted tours in Egypt promise total cultural and historical enrichment in all of the country’s heritage highlights – from the Pyramids of Giza to the temples of Ramses II and Nefertari in Abu Simbel. During a stopover in Luxor, you’ll have the opportunity to tour the ancient temple complex of Karnak in the company of an expert local guide.

If you’re fascinated by ancient history, our luxury escorted tours in Egypt promise total cultural immersion at extraordinary sites like Karnak and Abu Simbel. Click here to download our latest Egypt and Jordan touring brochure or call our team today on 0808 231 6741 for more information.