Eight unforgettable experiences along the Irrawaddy

Dazzling sights come thick and fast along the Irrawaddy river, immortalised in Kipling’s poem as ‘The Road to Mandalay’. You’ll see everything from gold stupas shimmering in the sunlight to fishermen casting their nets and locals doing their laundry at the water’s edge. The river is the lifeblood of Myanmar; its main artery of trade and transport, a source of food and water, a sanctuary for wildlife and a rich seam of culture, mythology and storytelling. Here are some of our favourite experiences on a voyage through this fascinating country. 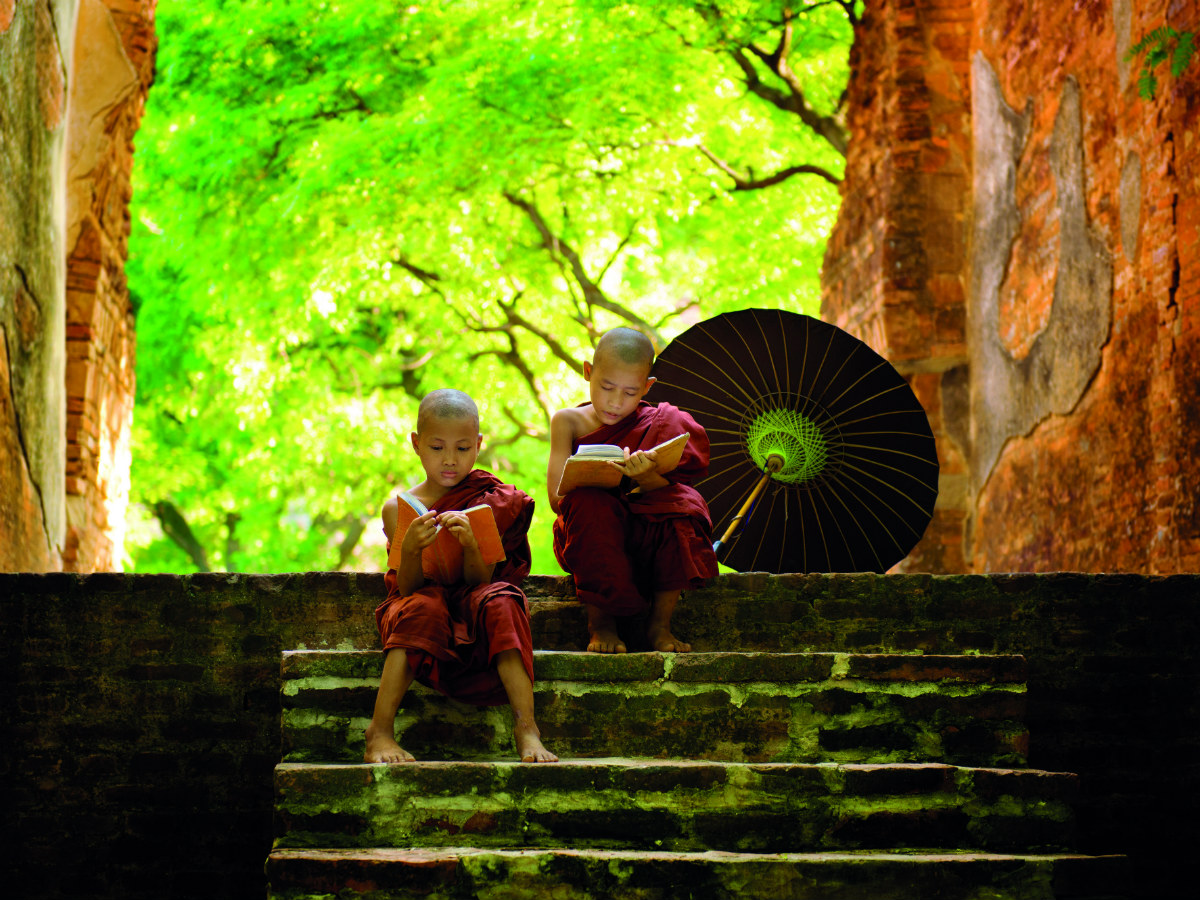 Most people in Myanmar are strict Buddhists and all Buddhist men serve some time in a monastery at some point in their lives, some as very young boys. Early every morning, barefoot monks in dark red robes receive alms, or food, from members of the public. The ritual is sombre and dignified; the monks walk slowly through the streets carrying silver bowls and local people donate rice and other food; the monks depend on donations to eat. Visitors can participate in this essential part of daily life.

However many photographs you’ve seen of the longest teak bridge in the world, there’s nothing to beat witnessing the real thing. Balanced on spindly stilts and stretching 1.2km across a lake at Amarapura, the bridge is the ultimate Kodak moment, especially at sunset, when it’s silhouetted against a fiery sky. Locals parade back and forth, creating thousands of photo opportunities. You’ll see the structure from a rowing boat, with a chance to snap it from every angle while enjoying sundowners served on board.

From the river just north of Mandalay, you’ll see a vast brick structure, partly overgrown and distinctly crumbling; giant cracks appeared in the late 19th century as a result of two earthquakes. This is just the base of what was meant to be the biggest pagoda in the country, although it was never finished. What’s enjoyable about this busting riverside complex is that there’s a chance to ride from the dock on rattling ox carts; to climb up the brick structure if you turn a blind eye to the complete lack of health and safety; and to take a selfie along the road next to the Mingun Bell, the largest working bell in the world. You can actually climb inside and put your hands over your ears while someone bongs the outside. 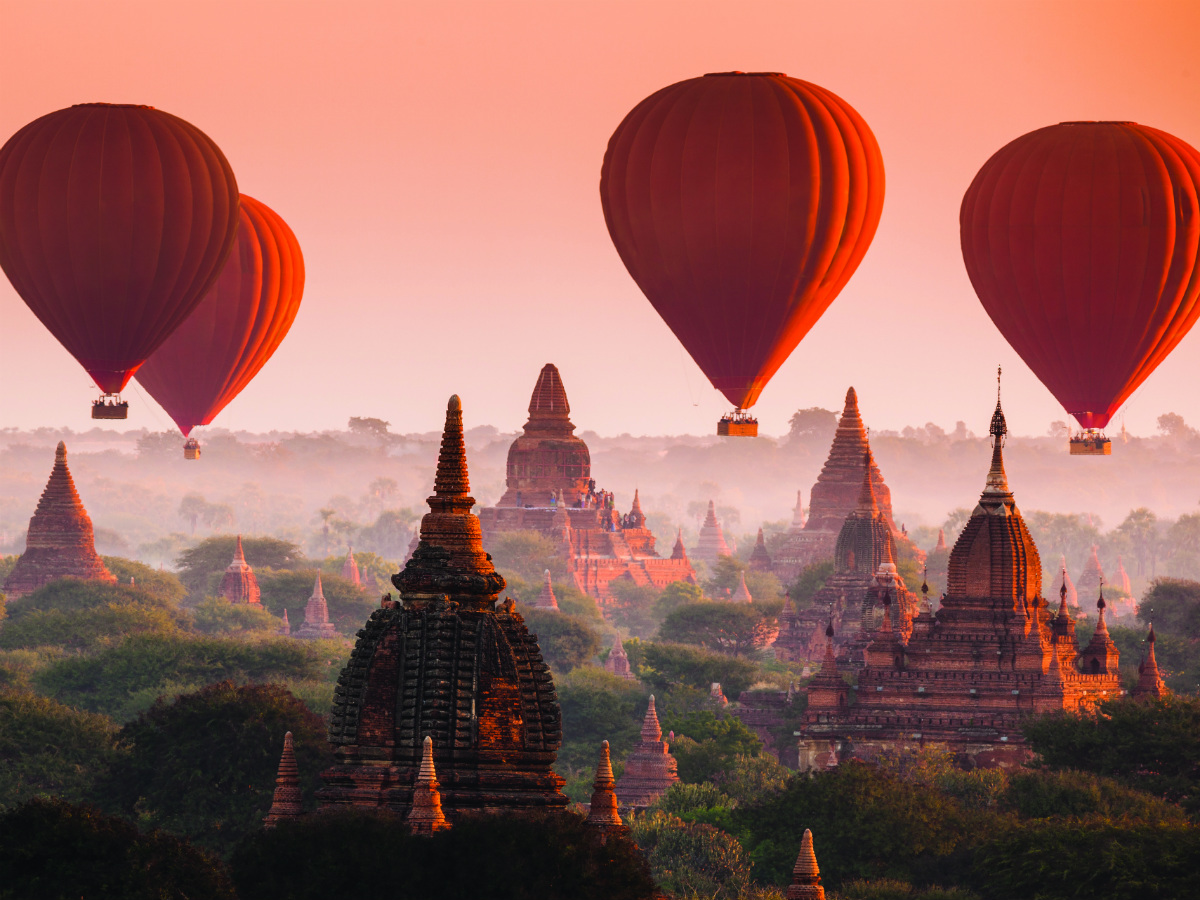 Before dawn, dozens of hot air balloons rise gracefully into the sky at Bagan, where hundreds of magnificent temples are scattered across the Irrawaddy’s flood plain. It’s a magical and almost spiritual experience, watching the sun rise over the distant hills, turning the brick stupas a glowing red and reflecting off the distant river. If you don’t take the balloon flight, climb up one of the temples either at dawn or sunset to meditate and watch the changing colours.

A half-day trip from Bagan, Mount Popa itself is a massive, forested volcano towering over Taung Kalat, a bizarre, sheer-sided volcanic plug with a golden temple complex glinting on its summit. Locals regard Taung Kalat as a spiritual place and there are many rituals associated with climbing its 777 steps. You mustn’t wear red or black and you mustn’t swear (either will offend the resident nats, or spirits), which is challenging, given that you have to climb the steps barefoot and there are gangs of bold and cheeky macaque monkeys to get past. Still, the views from the top are stunning. Dating back to the fifth century AD, this ancient site close to Pyay is less commercial than Bagan and also pre-dates it. Sri Ksetra ruled the area for 400 years and today, the remains of temples, stupas and shrines are dotted across a plain and partly enclosed by the remains of the ancient city wall. The best thing is that you’re likely to have the place to yourself.

Men and women in Myanmar wear the longyi, a tubular cloth that can be tied in many ways. Once you’ve mastered the art, you will realise how comfortable and practical a garment the longyi is, especially in the heat. Women complete the look with yellow thanaka paste, made from the bark of a tree and serving as sunblock as well as facial adornment; you’ll see everything from stripes to pretty leaf designs. Complete the transformation by learning the local greeting, ‘Mingalaba’, and you’ll be greeted with beaming smiles.

Gazing at the Shwedagon Pagoda

Not on the Irrawaddy as such but the highlight of any visit to Yangon, where Scenic’s voyages start and end. This vast, shimmering gold pagoda is more than just a place of worship; it’s a social scene, a souvenir market, a gathering spot and a place of singing and chanting. Locals flock here at sunset to promenade, chat and light lamps and candles in prayer. The complex is a welcoming haven in the chaos of the city and a breathtaking example of the massive significance of Buddhism in this deeply spiritual country.

You can see all of these on a luxury Scenic river cruise on the Irrawaddy, for more information about our South East Asia trips click here

Dominic Keely
Dominic is Scenic's Marketing Exec. His favourite river is the Seine, because of the rich history of the region. Dom's a huge football and Manchester United fan, and plays on a team himself.
Tags: Irrawaddy Myanmar Pagoda