Banff National Park forms part of the legendary Canadian Rockies, a region of untouched natural wonder. After the Canadian Pacific Railway opened the Rockies to the world in the 19th century, these precious lands were designated national park status to protect them for future generations – with Banff becoming Canada’s first official natural park, and the world’s third.

Since then, Banff and its neighbouring parks (Jasper, Kootenay, Yoho) have welcomed visitors from around the globe, promising alpine adventure, life-affirming vistas and close encounters with beloved indigenous wildlife. Banff is among the most popular of the Rockies’ protected provinces, providing a life’s worth of sights, sounds and discoveries within its cherished boundaries.

Travel Canada with Scenic, and you’ll journey to the heart of the Banff National Park, experiencing its extraordinary panoramas and natural elements first-hand. To give you a taste for what awaits in Canada’s most beloved national park, here we provide an in-depth guide to the highlights of Banff.

With Scenic, you won’t just see Banff, you’ll live it. Our Journey Designers have handpicked a collection of special excursions and events which showcase the adventurous spirit of the region, helping you to encounter the majestic vistas and wildlife which make this region so truly special. Explore some of the experiences you can look forward to below. Experience the coming together of ice and rock as you delve into an unseen world, deep within the untouched realm of Grotto Canyon. With ancient native rock art adorning sheer faces of rock and icefalls standing silent where they’ve frozen, you’ll feel you’ve entered another world. Walking the frozen creek bed of Grotto Canyon is one of our more active Scenic Freechoice excursions, but one you shouldn’t miss if you want to experience a different side to the natural wonders of Banff.

Helicopter Flight Over the Three Sisters 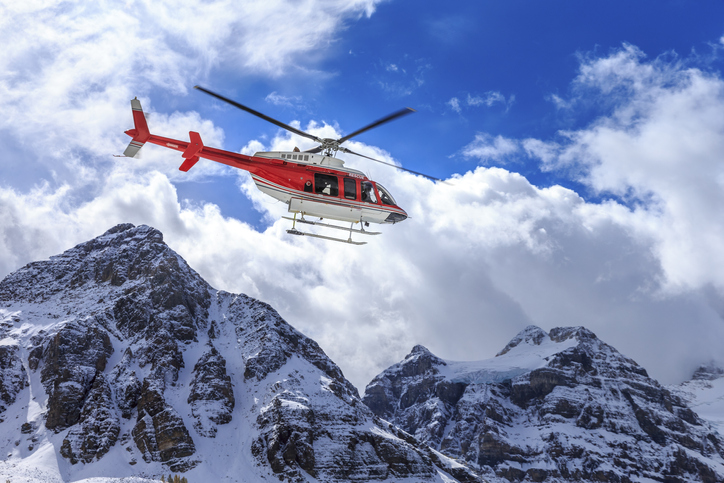 With views this good, you’ll be keen to get up high to savour the spectacle – and what better way than with an exclusive helicopter tour of Banff’s enchanting alpine vistas. Soar over this spectacular region on a guided heli tour, where you’ll see sights like Sulphur Mountain, Banff town, Lake Louise and the Three Sisters peaks from a wholly different perspective. It’s the perfect way to get a handle on the extraordinary scale and grandeur of the Canadian Rockies.

Dogsledding through the Banff Wilderness

For a more visceral, authentic experience in the Banff National Park, Scenic Freechoice gives you the chance to try your hand at an ancient local pastime: dogsledding. Once the only way to navigate the harsh wilderness, Alaskan Malamutes have been relied on for centuries for efficient transportation through the Rockies’ frozen wastes, and now you’re invited to take the reins and command your own dogsled team. Embark on an unforgettable journey through one of Banff’s most inspiring regions, and learn the history, customs and folklore of this enchanting mode of transport.

Banff’s seemingly limitless terrain of ice, snow and rock may appear inhospitable, but look closer and you’ll discover lands rich in wildlife, flora and precious ecosystems. From big game favourites like moose, elk and the illusive grizzly, to rare species of pine and fir trees found only here, the unique ecoregion of Banff supports a dazzling array of life. Unearth the indigenous wonders of the region on a guided nature hike, taking in dramatic elements like Bow Falls and Lake Minnewanka as you savour the very best of Banff’s natural world.

One of the great waterways of the Canadian Rockies, the Bow River flows from the heart of Banff National Park, winding its way southeast to form the South Sasakatchewan River, which ultimately empties into Hudson Bay. On its journey through the Rockies, the river passes through a truly untouched region, providing access to areas rarely experienced by man. On a special Bow River float trip, you’ll take your place on board an oar-powered raft, travelling downstream as you take in the superb scenery and local wildlife in the company of an experienced local guide. The Canadian Rockies conjure images of cowboys and lone rangers, pitting their wits against the elements as they strive to make a living in these once hostile lands. As part of a special Scenic Freechoice dining event, you’ll step into the shoes of a Canadian cowboy, as you enjoy a wagon ride through the lowlands of Sulphur Mountain, hearing folklore from an authentic local ranger. After an inspiring journey that takes you back in time, you’ll stop at the base of the mountain, make camp and enjoy a hearty barbecue in the open-air. What better way to experience Banff’s beauty and heritage?

Enjoy adventures by day and luxuries by night with Scenic Special Stays. Handpicked for their exemplary welcome and unbeatable locations, these hotels provide the utmost in luxury and comfort whilst ensuring you’re always close to the action. Take a look at the Scenic Special Stays you’ll enjoy in the Banff National Park below.

Set on the shores of Lake Louise, this luxurious mountain hotel has been accommodating guests in the heart of Banff National Park for over a century. Established by the Canadian Pacific Railway Company in the late 19th century, the hotel was built to accommodate a wave of international visitors, drawn to the region for its lauded natural beauty. With enchanting views guaranteed from all the hotel’s luxury suites, you’ll wake rested, inspired and ready for the day’s adventures.

Lovingly dubbed the ‘Castle in the Rockies’, the legendary Fairmont Banff Springs is arguably one of the most famous hotels in Canada. Built too by the Canadian Pacific Railway Company, this majestic hotel is designated a National Historic Site of Canada, thanks in part to the huge influence it had in popularising this special region. A Scenic Special Stay in this enchanting hotel is the perfect way to end another memorable day in the Rockies.

Inspired by the natural wonders of Banff? Why not take a look at our collection of luxury escorted tours in Canada, taking in the majesty of the Rocky Mountains and the cosmopolitan culture of the country’s great cities. For more information, click here to download our North America touring brochure or call our team now on 0808 302 4440.