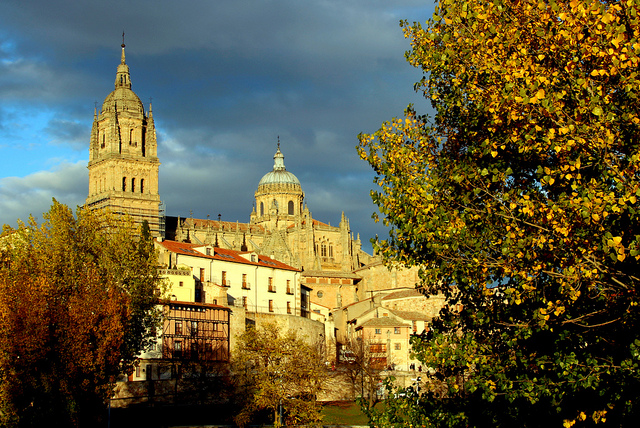 Just across the border from Portugal, Spain’s Golden City of Salamanca is set to celebrate its biggest time of the year. For nearly 400 years, La Feria de Salamanca and the festival of the Virgin of the Meadow show off everything the city in the Douro River Valley has to offer.

La Feria, held each year in early September, is a special time for the locals – called “salamantinos”. The event reflects on the region’s traditions of agriculture and livestock production. The event also harkens back to a legend that the city’s patron saint – the Virgin of the Meadow – helped the townspeople stop a foreign invasion during the War of the Spanish Succession in 1706.

There is a Romanesque statue of La Virgin de la Vega that is permanently displayed in the Catedral Vieja, Old Cathedral of Salamanca. On 8 September, to start the fair, the statue is taken out to be paraded around the Old City. People follow the procession, many of them dressed in the city’s traditional garb, the traje charro. When the statue has finished its journey through the city, it is brought to a plaza where it is showered with carnations, daisies and garlands.

After the religious celebration, the fair continues for the next two weeks. Until 21 September, there will be street theatre, food stalls, fireworks and arts and crafts exhibitions. There are also indoor concerts, theatrical plays and night clubs that go long into the night.

Salamanca is best known for its tradition of bullfighting. Most afternoons during the fair, bull fights feature at La Glorieta, the city’s Plaza de Toros or bull ring. Northwest of Madrid, Salamanca is the capital of the Castile and León region. Over its history, it has been the target of many invasions, at one time being successively taken over by the Celts, Romans and Muslims. For those enjoying Douro river cruises, the city is a popular destination on their holiday journey.