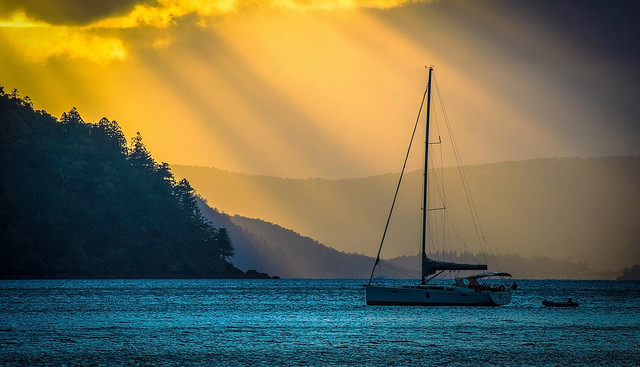 There aren’t a lot of things than can enhance the natural beauty of the Great Barrier Reef in Queensland. But, in a few weeks, some of the world’s fastest and most elegant racing yachts will try to do just that.

Starting 15 August, in the tradewinds off the coast of Hamilton Island, some of the best sailors will compete in Race Week – a mixture of racing, food, fashion and celebration. Hamilton Island Race Week is Australia’s largest offshore keelboat regatta. The week takes on a carnival-like atmosphere where top-class racing is combined with on-shore fashion shows, luxury cars, live music and gourmet foodie feasts.

The race week brings together a multitude of racing classes. For the big boat, fast racing fans, there are four classes for racing boats – IRC, One Design, racer/cruiser and racing multihulls. There are three slower classes in the cruising, non-spinnaker and cruising multihulls.

The event was started after land developer Keith Williams attended the America’s Cup races in Newport, Rhode Island in the United States. From that experience, he wanted to bring racing down under. Started in 1984, the event has grown year on year.

Hamilton Island is one of the country’s most beloved holiday destinations. The Great Barrier Reef region in Queensland is a top stop on Australian tours. In over 30 years of racing, it has become a popular location for seasoned sailors and their supporters.

More than sailing, the event also brings together high-end fashion and gourmet food. Race week hosts a fashion show and all the spectators dress to impress. There is also the indulgence of fine wines and great food. There are dinner and lunch events held at the island yacht club. Three of Australia’s best-known celebrity chefs, Guillaume Brahimi, Shannon Bennett and Kylie Kwong will be on hand to offer delicious choices.

Another popular occurrence during race week is the appearance of local humpback whales who like to show off in the water. There are also pool parties planned, overlooking Catseye Beach, and a street party on the event’s final Friday.