Relics found by farmers in Cambodia 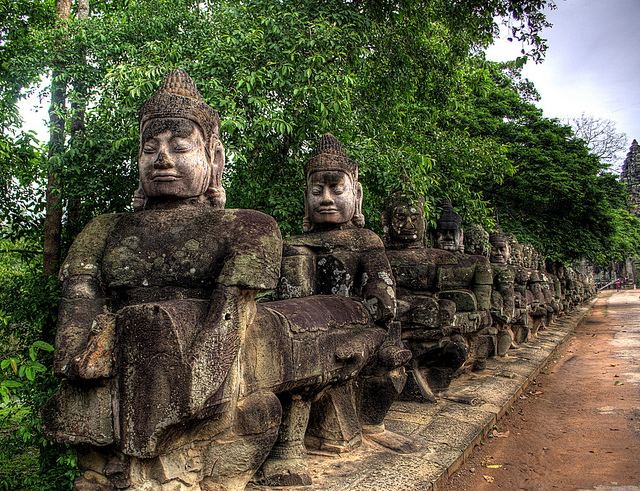 Two recent finds in Siem Reap will hopefully shed some light on the history of the Mekong River Valley. In two separate events, farmers have stumbled upon ancient ruins and priceless artefacts.

Villagers in Siem Reap province’s Angkor Chum district have uncovered an ancient statue in the shape of a dragon. The dragon was found by two cattle herders whilst walking through the fields. Siem Reap is the capital city in the Angkor region of northwestern Cambodia. The area is growing in popularity amongst travellers, and is often a stop on Mekong river cruises.

The two farmers came across the statue when they were hunting for frogs in the wet ground.

According to an announcement from the Apsara Authority, the body that oversees the Angkor Archeological Park, said the villagers believed the statue was a representation of an ancient dragon king. Local customs say the likeness of the king would bring happiness to the Kok Doung commune villagers if they prayed to it.

“The villagers were surprised about this dragon statue. We think the statue has appeared to give happiness to the villagers,” one of the farmers said to local media.

The statue is now on display at a local pagoda.

Earlier in the month, the fragments of rare statues were also found in the area. Experts who examined the statue concluded that two pieces likely dated from the end of the Bayon era – around the end of 13th century.

One statue, a sitting figure, and the other, a fragment of a statue’s head, are about 20 centimetres tall by about 17 centimetres wide, and nine centimetres thick. The two statues were brought in for cleaning and studying their ancient style before they are moved to a museum, according to the Aspara.

“When they were digging up the land for farming, they found them,” said Sam Ban, police chief in the district, to local media. “They panicked. They thought that they were some kind of ancient statues. They reported them to us, [and] they were a type of our priceless ancient statues.”