The Rhine is set aflame in Koblenz 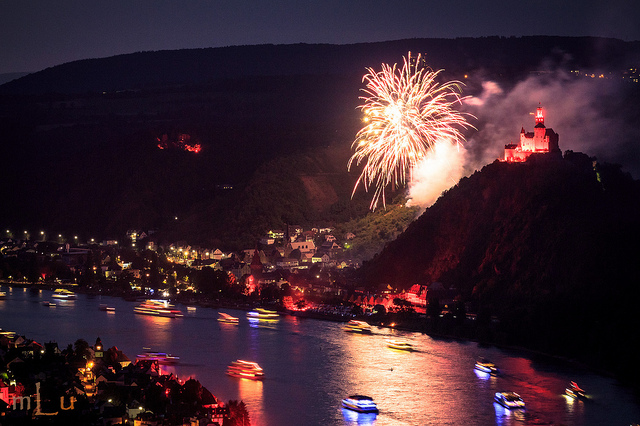 Throughout the summer, the Rhine is routinely set on fire. No emergency crews or fire brigades need to be called for this unique celebration of the waterway that means so much to the region.

In Koblenz on 8 August, a flotilla of boats will take to the river and colourful fireworks light up the skies over the Rhineland-Palatinate. The fireworks are launched from uniquely illuminated ships. The Rhine in Flames in Koblenz takes place every year on the second Saturday in August and is accompanied by a folk festival.

The event starts as the decorated ships cover a 17-kilometre route between Spay and Koblenz. When they arrive, the light show gradually starts. The boats launch red Bengal lights. The flares cause a beautiful, red glow that makes the river appear to be aflame. When the Bengals burn out, the ships release volleys of fireworks into the night sky.

Visitors to Koblenz are treated to a great celebration. On the river promenades at the Deutsches Eck – along the Moselle and the Rhine – there are food and craft stalls, as well as a funfair. There is also live music and stage productions. The Koblenz festival lasts for several days.

It is a fireworks spectacular that takes place along the most scenic stretches of the Rhine every year between May and September. The events take place in a variety of German cities along the river. From Rüdesheim to Bonn, spectacular pyrotechnics and curtains of fire cover the riverbanks and landmarks along the way. The magical red glow creates a romantic and unforgettable experience.

Of all the displays, the Koblenz event is considered the most dramatic of the summer. The Rhine River Valley is an extremely popular tourist destination. With comfortable temperatures and an abundance of fine wines and great food, there are a number of popular Europe river cruises through the region.