The street is everyone’s stage in Chalon-sur-Saône 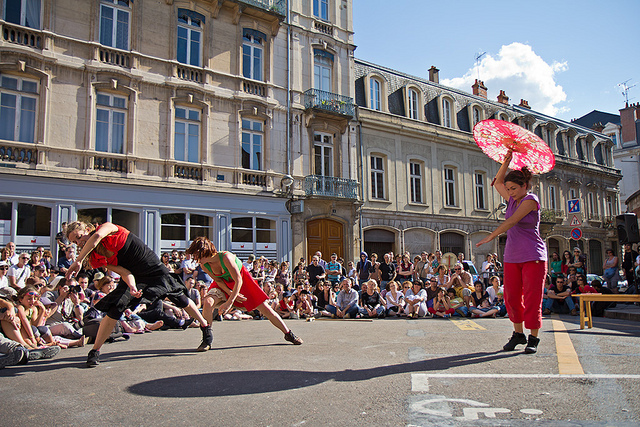 On the Saône river this July, hundreds of thousands will gather to celebrate the freedom and creativity of street performance. The Chalon dans La Rue Festival draws an international assortment of street artists and performers to the small community of Chalon-sur-Saône.

Chalon-sur-Saône is in the southern part of Burgundy in France. It grew to prominence as a port supplying local wines throughout the country thanks to its location on the river and proximity to the Canal du Centre, which opened in 1792. The Saône joins up with the Rhône near Lyon, helping to make the small city a popular destination for river cruises.

From 22 July to 26 July, over a thousand artists will perform for free. This small town becomes an international hot spot as it is transformed into a giant show where hundreds of thousands of visitors can be both spectator and participant. Throughout the week, artists regularly encourage audience participation in the event. During the festival artists actually invite the crowd to reflect on their creations, as well as take part in them.

On the streets and in the squares of the town, there will be theatre productions, puppet shows, musical acts, acrobatic dancers, travelling performers and even firework displays. There are a number of events being held at the town’s main theatre, The Abbatoir.

Throughout Europe during the summertime, street performance art enlivens many cities. But organisers believe the Chalon dans la Rue is the pinnacle of the art form. The vast variety of the event programme brings together multiple forms, languages and cultures, and audiences can enjoy the event, no matter their background. For many, it is the highlight of the Burgundian summer.

The town is best known as the birthplace of photography. In the 19th century, its most famous resident, Nicéphore Niépce was a pioneer in photography and the town houses a museum that has early cameras and hundreds of thousands of antique photographs.