10 Must-Visit Places on the California Coast

California; of all the US states this is arguably its most iconic. Covering 770 miles on the brooding Pacific seaboard, California is the third largest state in the USA, and one characterised by its majestic backdrop of world-famous cityscapes and exquisite natural beauty. From the star-strewn pavements of Los Angeles to the towering redwoods of Humboldt County; the Golden Gate of San Francisco to the warm sands of the Big Sur - California encapsulates all that is great about the USA in a negotiable package, making it the perfect destination for a luxury escorted tour.

Whether you’ve booked an all-inclusive tour of California or are seeking further inspiration, here are 10 must-visit places on the Californian coast. 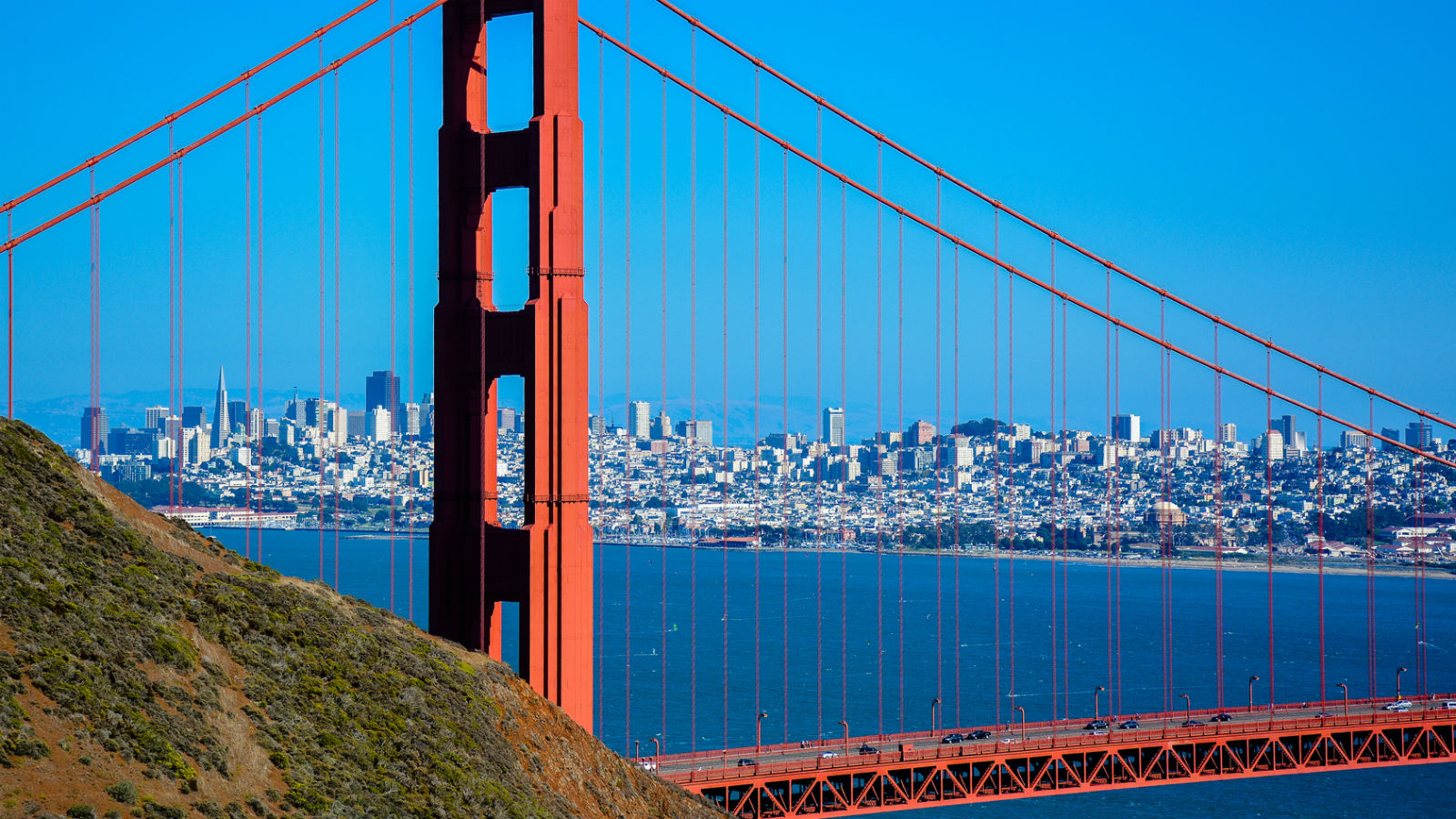 The cultural capital of California; San Francisco is among the most sought-after cities in the US, and is famed for its fascinating heritage, charming neighbourhoods and slanting boulevards. Since the 1920s, the so-called Golden Gate City has been at the forefront of cultural change in the US, boasting a variety of famous landmarks - including cable cars, Fisherman’s Wharf, Chinatown, the Golden Gate Bridge and the Alcatraz Federal Penitentiary. 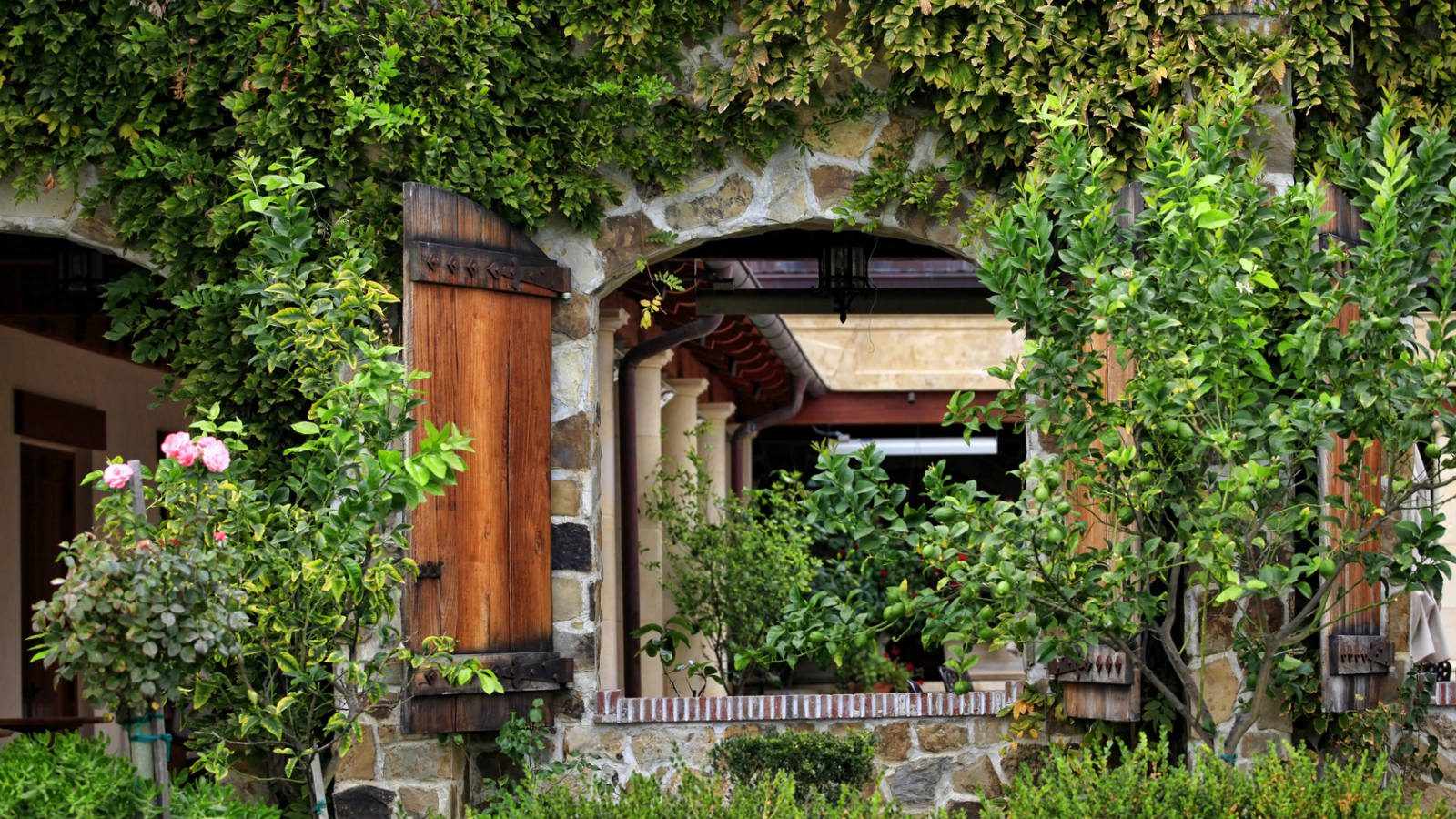 The Napa Valley has earned a global reputation for its delectable wine output, and yet it’s one of California’s smallest winegrowing regions, accounting for just 4% of the state’s total wine production. So what is it that makes Napa so successful when it comes to viticulture? The secret to its success lies in its dry Mediterranean climate, as well as its enormous grape variety. Over thirty-six different grapes are said to grow on Napa’s leafy, sun-drenched plateaus — more than any other winegrowing region in the world.

As a guest on a Scenic tour, you’ll be given the opportunity to visit one of the county’s esteemed wineries, where you’ll explore the vineyard before sampling a glass of your favourite vintage direct from the wine cellar. 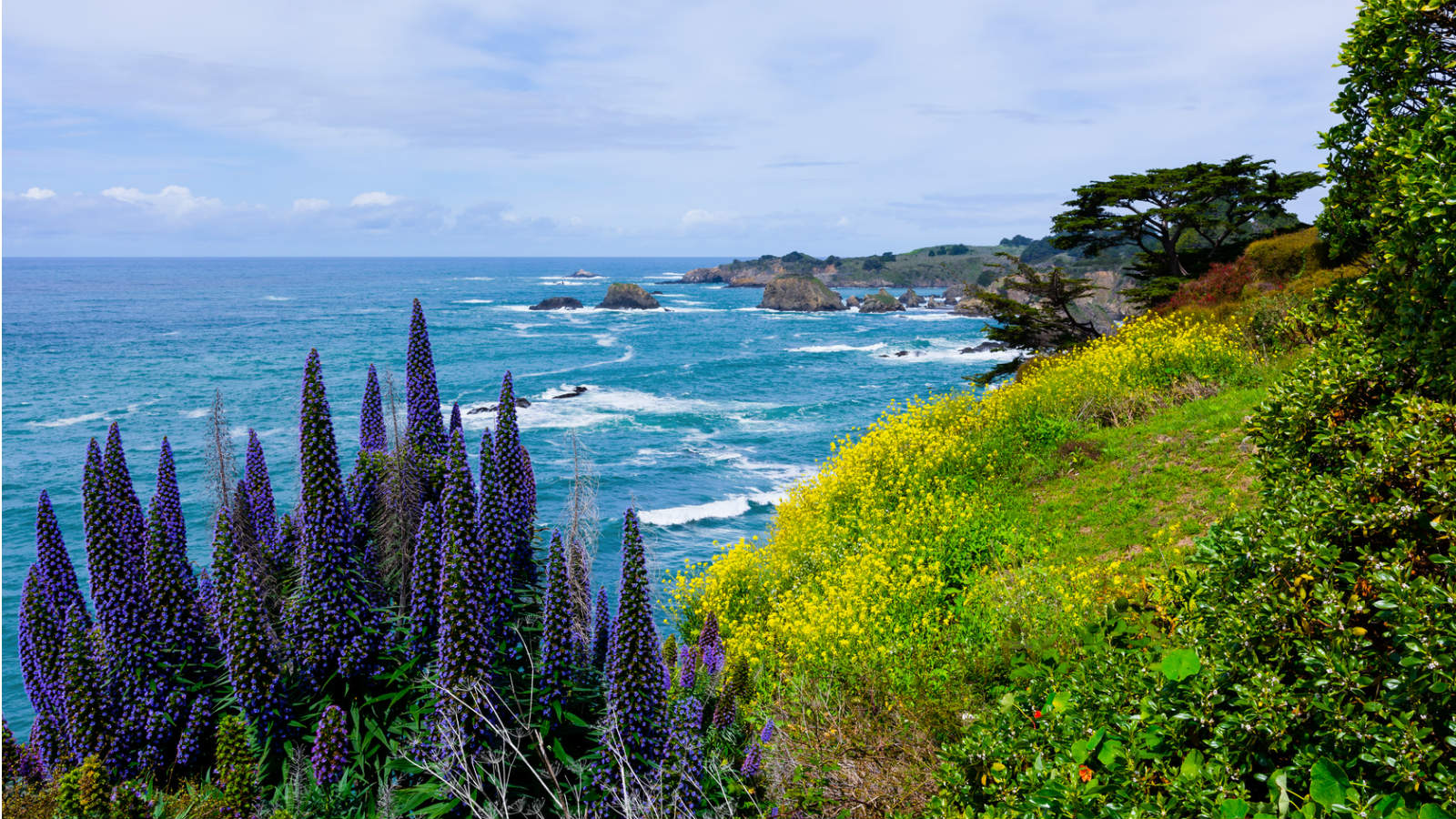 With the roaring Pacific Ocean to the west and the Gualala Redwood forests to the east, Mendocino is a town exposed to the primal elements, making it the perfect place to experience the peerless natural beauty of the Californian Coast. The area surrounding the town has been designated a section of the California Coastal National Monument on account of its pristine natural beauty, ensuring it remains untouched for future generations to enjoy.

Whether you choose to hike the glorious coastal trails, lay your beach towel on a secluded sandy beach, or delve beneath the shaded canopy of the native Redwoods — there is a lot to experience in this charming West Coast town. 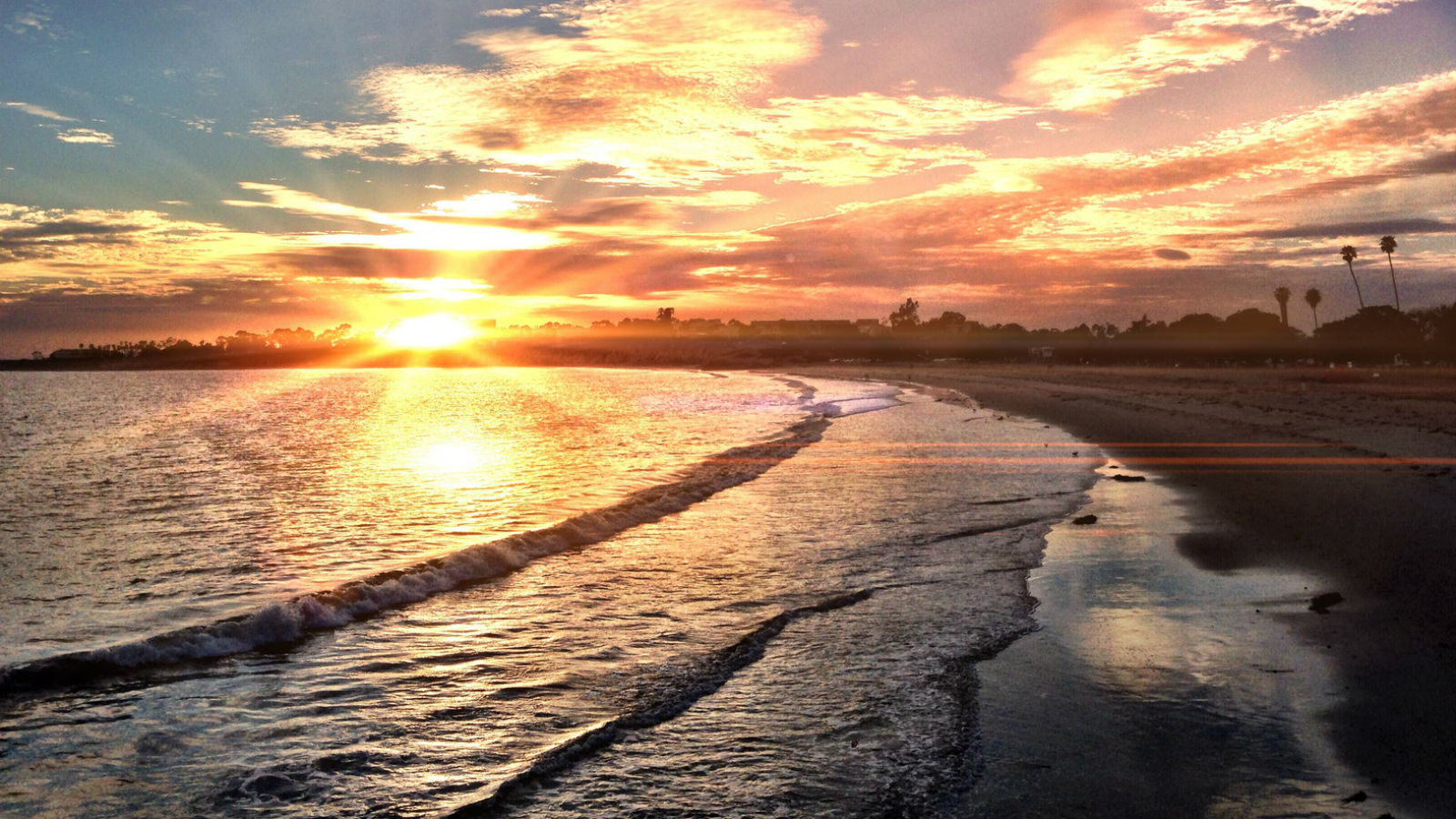 With its palm-flanked boulevards, Mediterranean-style stucco architecture and dramatic, mountainous backdrop; Santa Barbara is the archetypal Californian city. The city slopes upwards at a gentle gradient away from the Pacific Ocean, giving visitors plenty of opportunities to savour the fine views which grace the northern fringes of the city centre.

Like most cities in southern California; Santa Barbara is blessed with a roster of wonderful beaches where locals and visitors alike go to relax beneath the gleaming sun or catch a wave in the warm waters of the ocean. Our favourite stretch of sand is Butterfly Beach, whose westerly aspect makes it perfect for catching a Californian sunset. 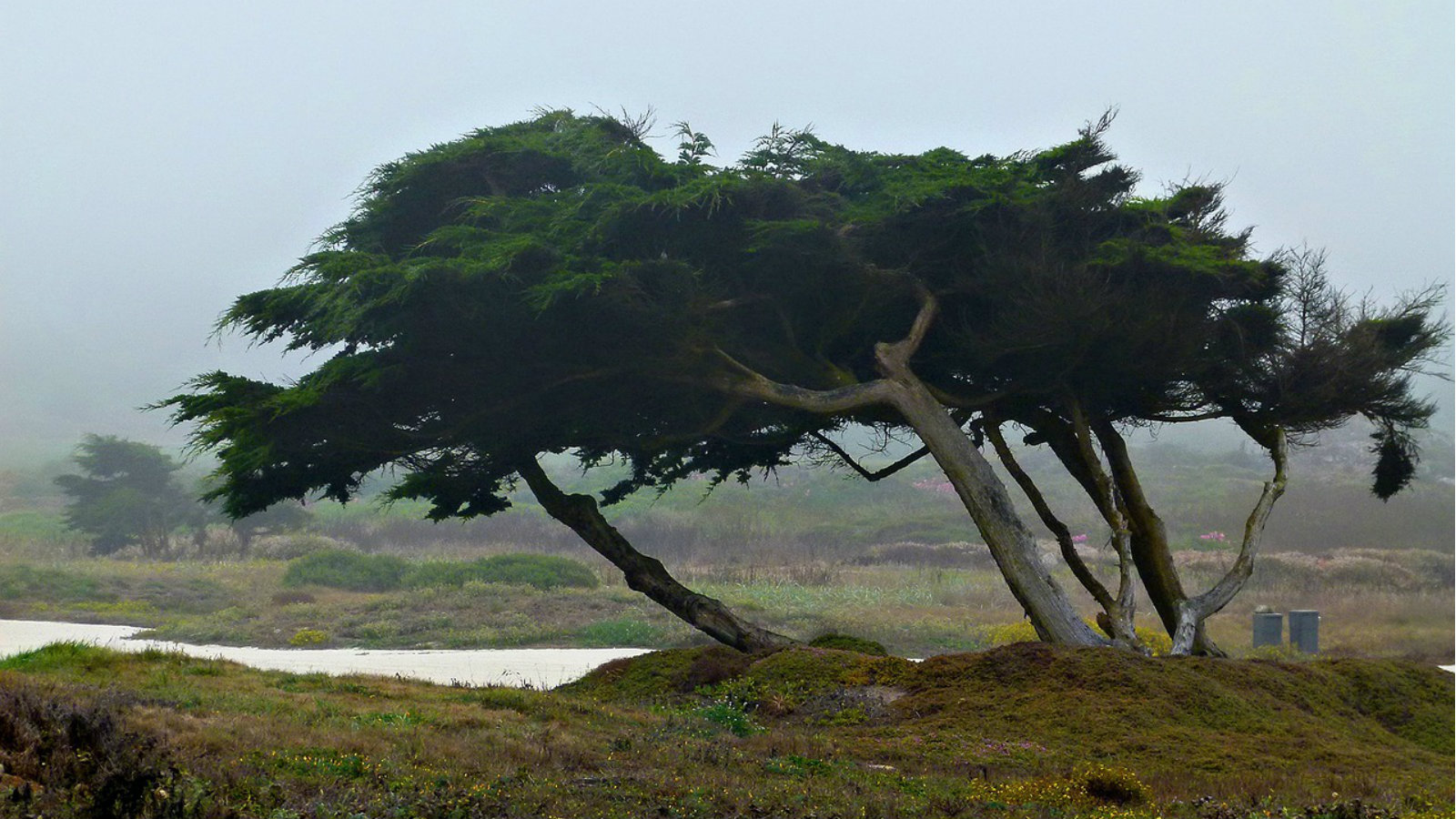 Nestled amid California’s rugged central coast, the city of Monterey offers a gateway to this imposing seaboard. Monterey was immortalised by US author, John Steinbeck, who used the city’s sardine-packing district in his 1945 novel, Cannery Row. While Monterey is no longer renowned for its seafood industry, the city’s original historic docklands area remains, and is now home to a selection of restaurants, bars and visitor attractions celebrating the heritage of this unique coastal metropolis.

Another renowned attraction in Monterey is the Bay Aquarium, one of the world’s leading salt-water marine wildlife centres. The aquarium benefits from a constant stream of fresh water, sourced from Monterey Bay and pumped directly into the tanks. This unique environment enables the centre to house a wide array of creatures, including jellyfish, great white sharks and Pacific octopuses. 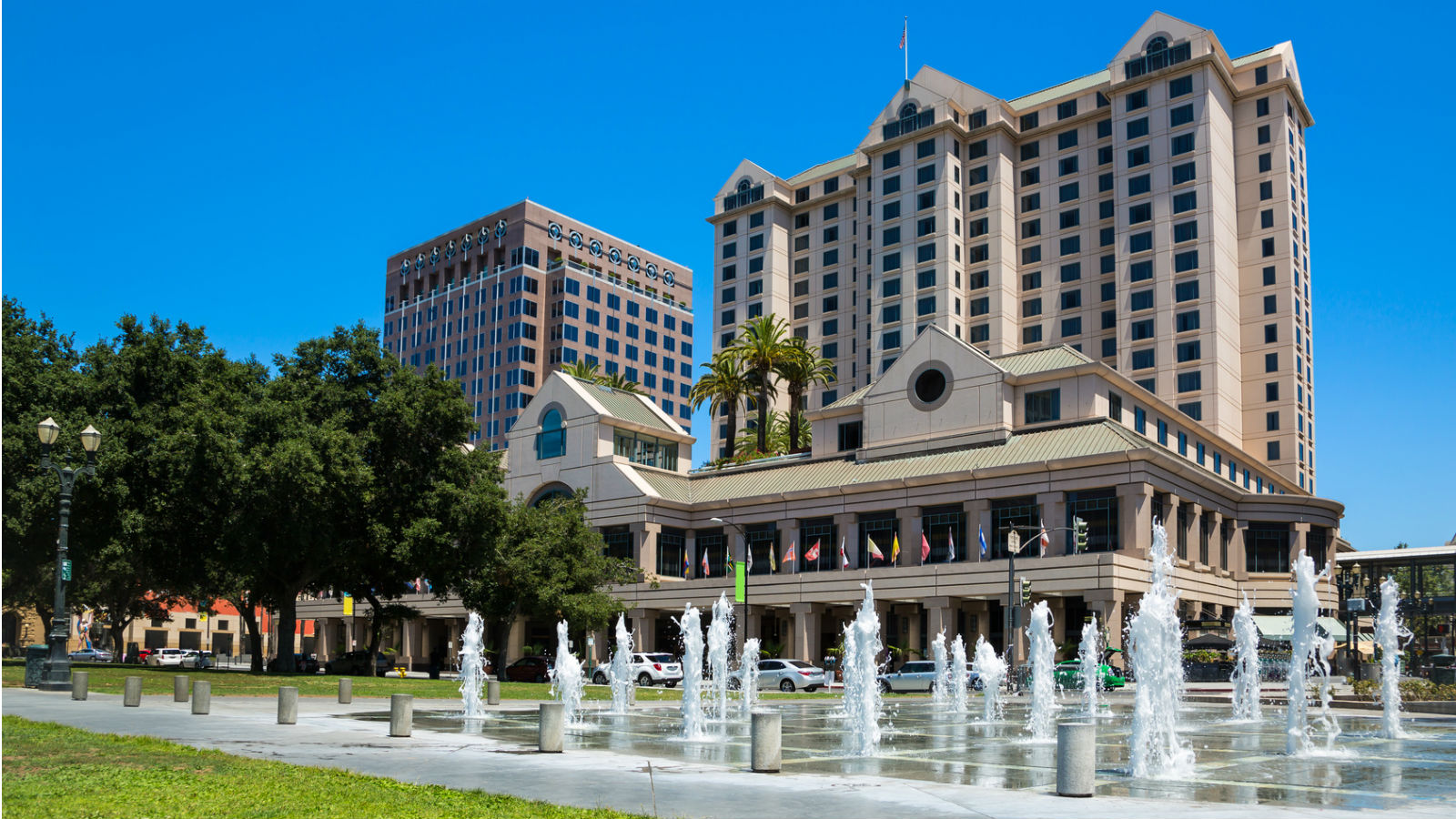 With cultural highlights aplenty, San Jose is well worth a stop on your Californian coastal odyssey. During your visit, be sure to explore the enigmatic Winchester Mystery House, an 18th century chateau brimming with rare curiosities. The house is famous throughout California for its connection to US gun magnate, William Wirt Winchester, and is said to be haunted by those who fell victim to a Winchester rifle. Superstitions aside, the history and heritage of the mansion make it an unforgettable visitor experience.

Far removed from its historic haunted mansions, San Jose is also part of the Silicon Valley, where hundreds of tech firms have set up shop in recent years. Companies based in San Jose include Google and Facebook, whilst the city is also home to the Hewlett Packard Garage to which such companies can trace their origins. Vibrant, sprawling and progressive; Los Angeles is unlike any other city in the world, and boasts more cultural sights than you could possibly fit into a fleeting stopover. Whether you want to explore the city’s motion picture heritage in Hollywood, experience the architectural splendour of the Getty Center, or catch a show at the legendary Walt Disney Concert Hall; there is a wealth of things to see in Los Angeles that will keep even the most ardent sightseer busy.

Or if you’d prefer to find a little peace and quiet during your visit to La La Land, the city is home to a wide array of parks, gardens and scenic hiking trails. Our favourite is Eaton Canyon, whose quiet trails each conclude beside a beautiful waterfall — a wondrous reward for a good day’s hiking. 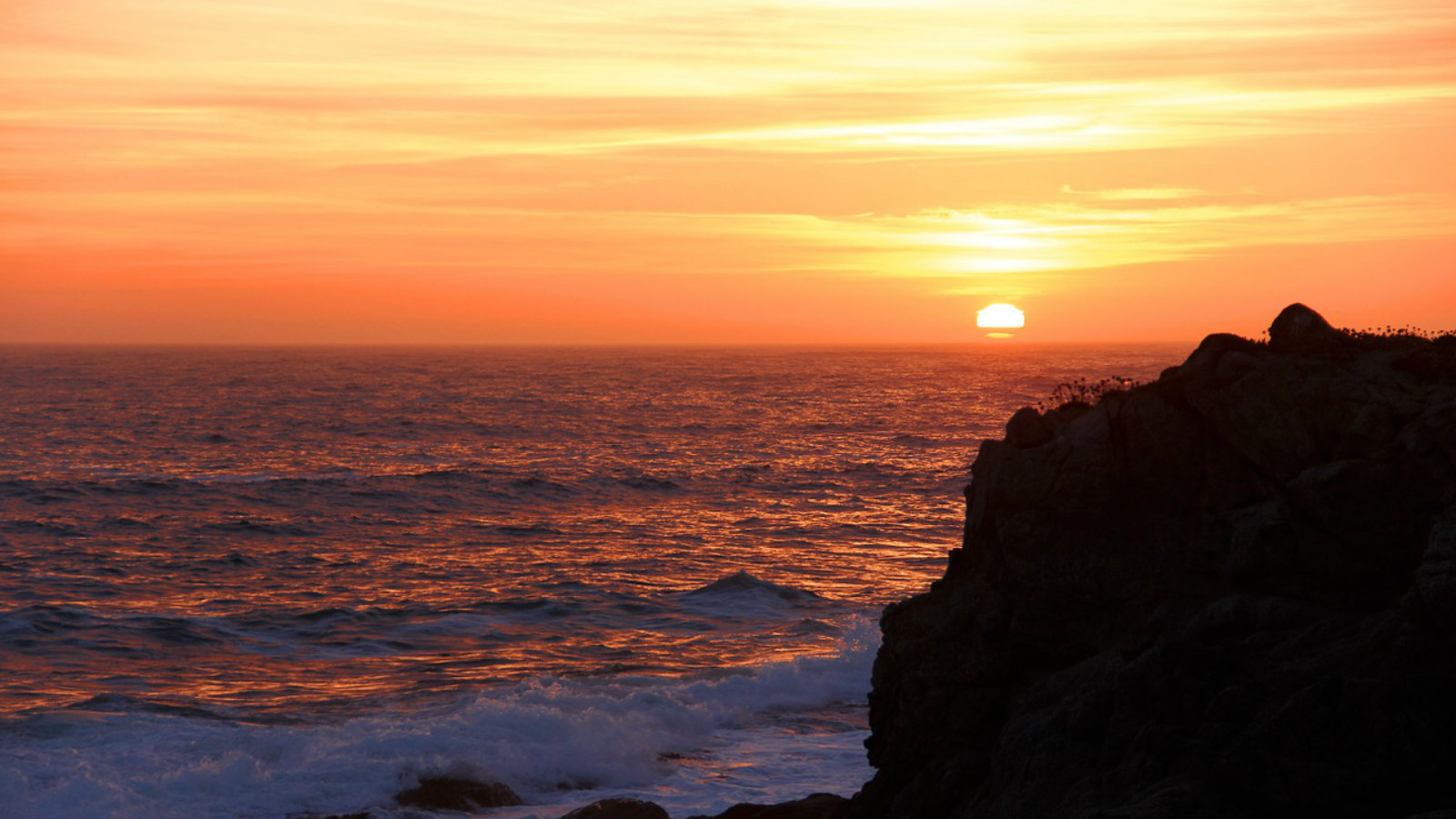 Experience the majesty and power of the Pacific Ocean with a trip to Bodega Bay. Home to a small town protected by a vast natural harbour; Bodega Bay is popular among sailors, kayakers and canoeists keen to explore the innumerable inlets and coves which litter this beautiful shoreline. As you’d expect from a secluded coastal harbour, Bodega is home to a handful of wonderfully secluded beaches, including Duncan’s Cove, Salmon Creek and the delightfully named, Furlong Gulch.

It’s not all sleepy coastal walks and private sunbathing at Bodega Bay, however. In 1963, Alfred Hitchcock chose Bodega town as the backdrop for his classic thriller, The Birds, and several of the locations seen in the film can still be explored to this day. 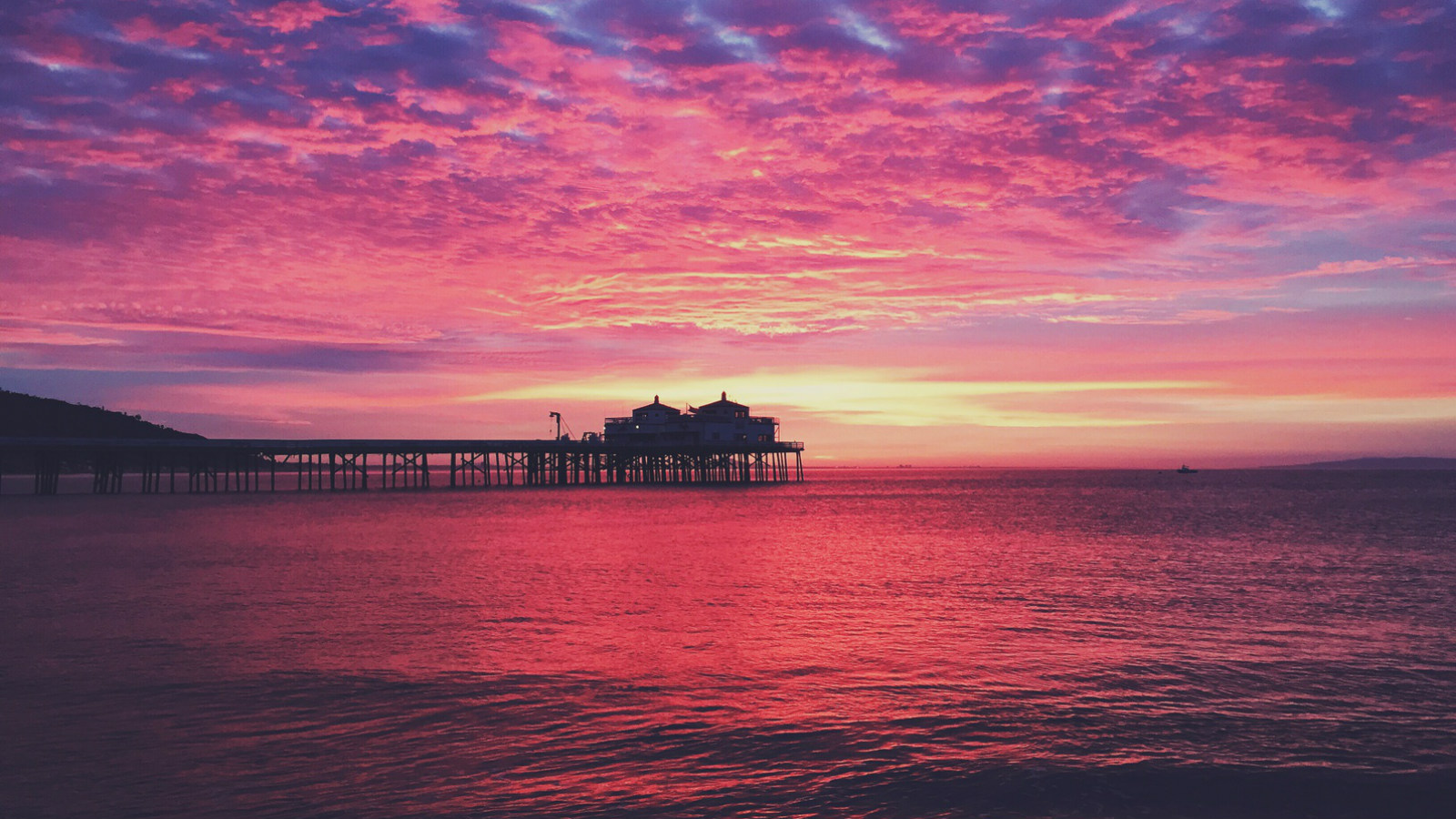 Situated 30 miles west of Downtown Los Angeles; Malibu is an affluent beach city where the rich and famous go to bask in the warm sun, or else stay fit and active in one of the many surrounding parks and nature reserves. Complemented by the slogan ‘27 miles of scenic beauty’ (in reference to its original length before it was incorporated into Los Angeles County), Malibu is a wonderfully scenic region, and the ideal place to don the walking boots to admire the coastal views as you trek north into the exquisite Agoura Hills.

For the best chance of spotting a famous Hollywood face during your stopover in Malibu, pay a visit to Zuma, Topanga, Point Dume, or County Line beach - or else delve into the flora-rich parks of Trancas Canyon or Malibu Bluffs. 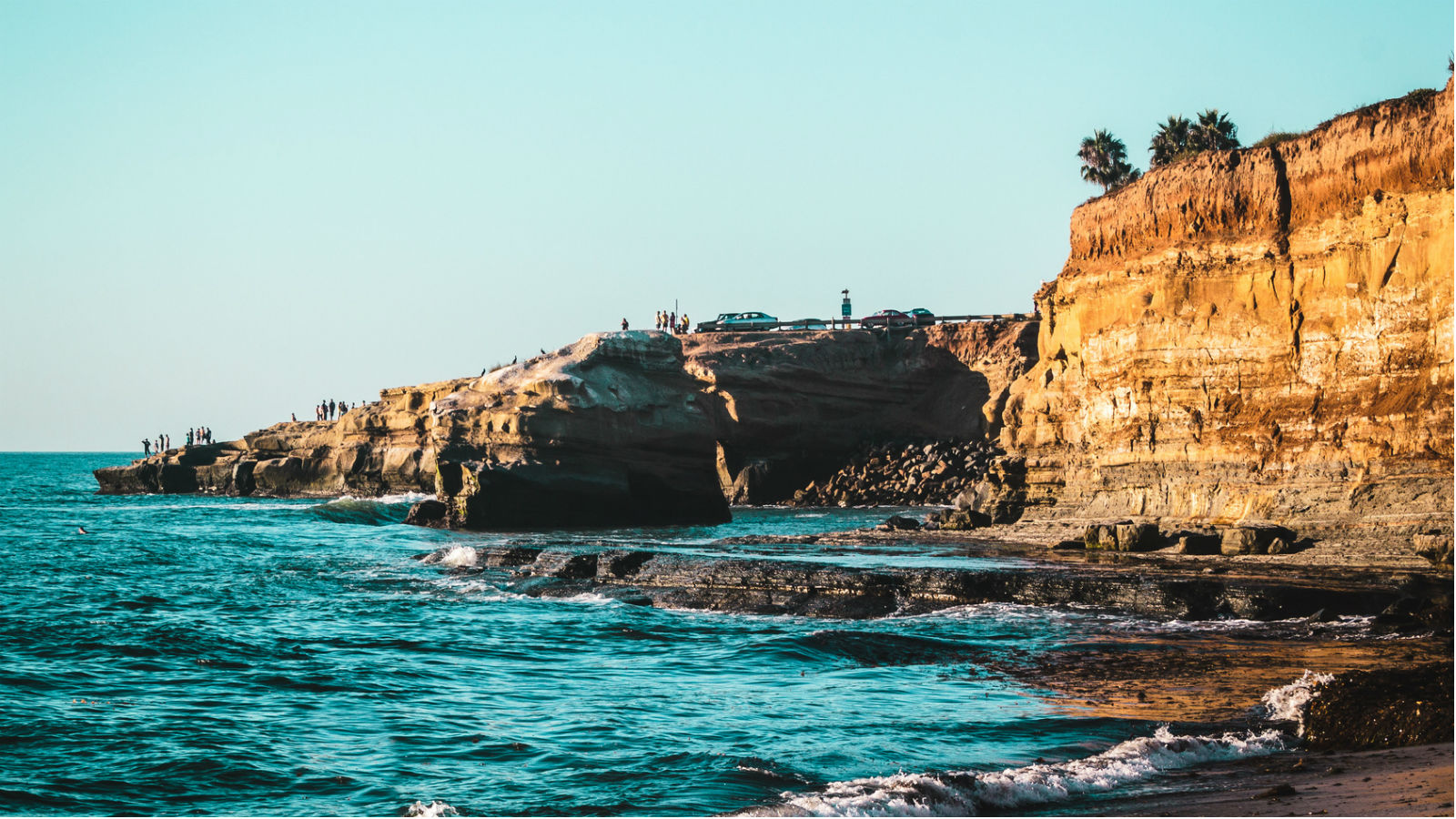 As the southernmost city in California; San Diego enjoys a wonderfully warm climate, and has a notable Mediterranean feel thanks to its significant Spanish heritage. Whitewashed stucco buildings are commonplace in this up-and-coming city, and San Diego is now considered one of the best places to live in the US. As for visiting, the city benefits from a flourishing alfresco café culture thanks to its year-round warm climate, and boasts innumerable parks and areas designated for outdoor recreation — perfect for picnicking on a sunlit afternoon.

Easily one of the best attractions in this fabulous Californian metropolis is the San Diego Zoo, which is housed in the city’s enormous Balboa Park. San Diego Zoo is one of the largest zoological gardens in the world, housing over 3,700 animals and over 650 species.

If you’re keen to explore the Californian coast in complete luxury, Scenic offer escorted tours to a number of the destinations listed, including Los Angeles, San Francisco, Napa Valley and Santa Barbara. To find out more, visit our dedicated Escorted Tours page or call us on 0808 159 8834.

Laura Barlow-Edwards
Laura is Scenic's Digital Marketing Exec. She loves travel; her first river cruise was on the Danube, and she fell in love with Budapest at first sight. In her free time, Laura is usually reading, travel blogging, or planning her next adventure.
Tags: America best california coast places usa west