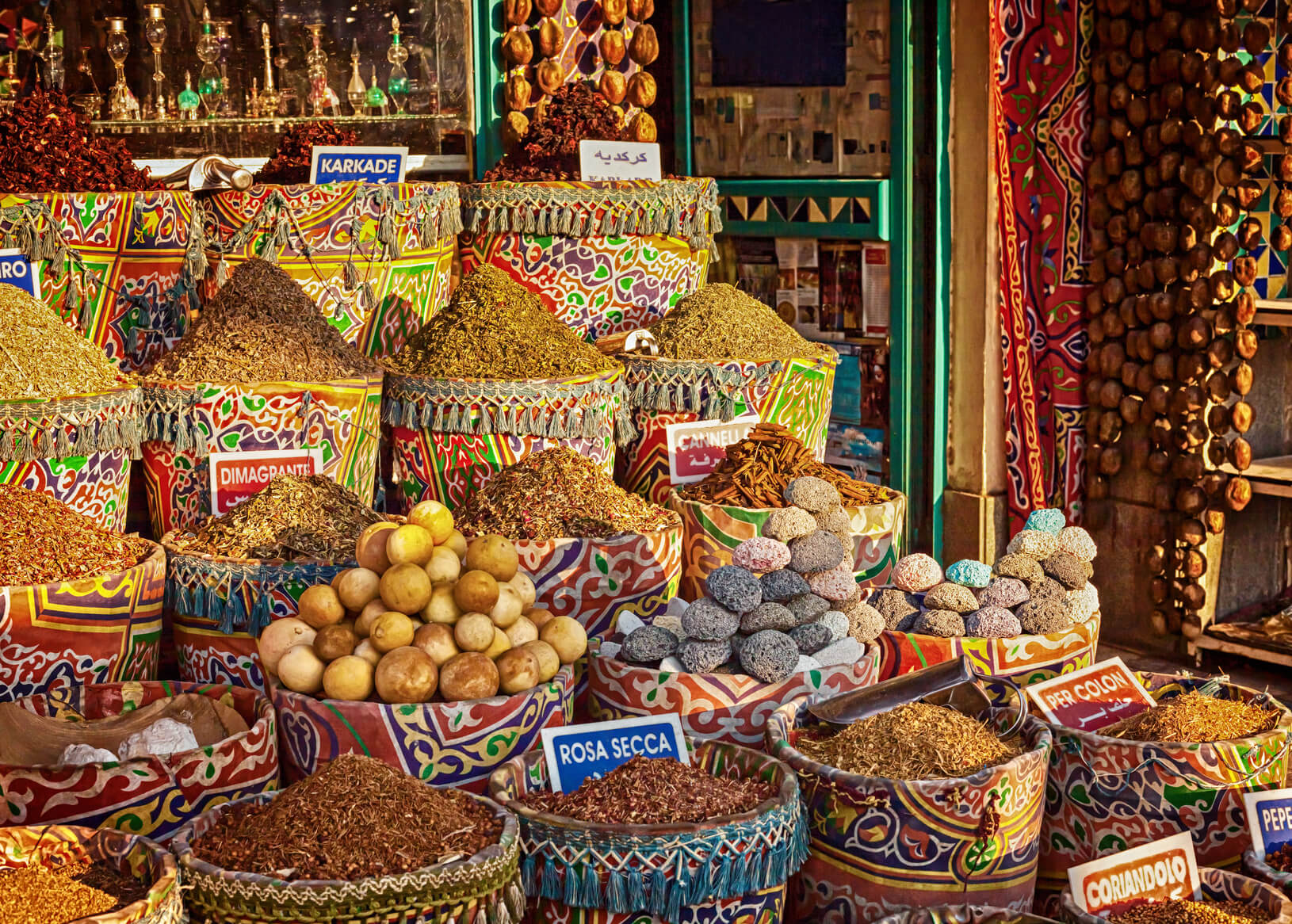 15 Dishes You Must Try in Egypt

The legacy of ancient civilisation has had a profound influence on Egypt’s culinary landscape. Though sharing similarities with Eastern Mediterranean cuisine – think rice-stuffed vegetables, kebabs, kofta and shawarma – the country has cultivated its own distinct diet, and one heavily reliant on the fertile, ancient banks of the iconic River Nile.

Egyptian people are proud of their culinary heritage, and rightly so, it is a colourful diet centred around legumes and vegetables, generously seasoned with a vast larder of fresh herbs and spices, chiefly cumin, cardamom, coriander, aniseed, cinnamon, mint and clove. If not grown locally in fertile soils, these herbs and spices are readily available from India, Europe and the Far East – such is the enduring efficiency of Egypt’s ancient trade routes, founded over 4,000 years ago.

While meat is becoming steadily more popular in Egypt, its expense throughout history has cultivated an expansive menu of home-grown vegetarian dishes. The most common meats used in cooking are chicken, duck, rabbit and pigeon, as well as liver and offal from sheep and cattle. As for seafood, fish is common along the Mediterranean seaboard and the immediate banks of the Nile, but further inland, local food is sourced almost exclusively from the soil.

Accompanying virtually every Egyptian meal is bread, or aish baladi, a glutinous form of pita bread that’s the lifeblood of the country’s rural, working-class communities. Such is the importance and centrality of bread in Egyptian life it is subsidised by the government, and its name alone is derived from the ancient Egyptian Arabic for ‘to live and be alive’.

For those visiting Egypt during a luxury escorted tour with Scenic, gastronomy promises to play a major role in your experience of this proud nation. From sampling ancient, regional delicacies such as kushari and areesh to tasting the finest Eastern Mediterranean-inspired cuisines prevalent in the country’s illustrious cities; your journey will showcase Egypt’s culinary heritage in all its colour and flavour.

To inspire your culinary odyssey through Egypt, here we introduce 15 Egyptian dishes you must try on a visit to the country. 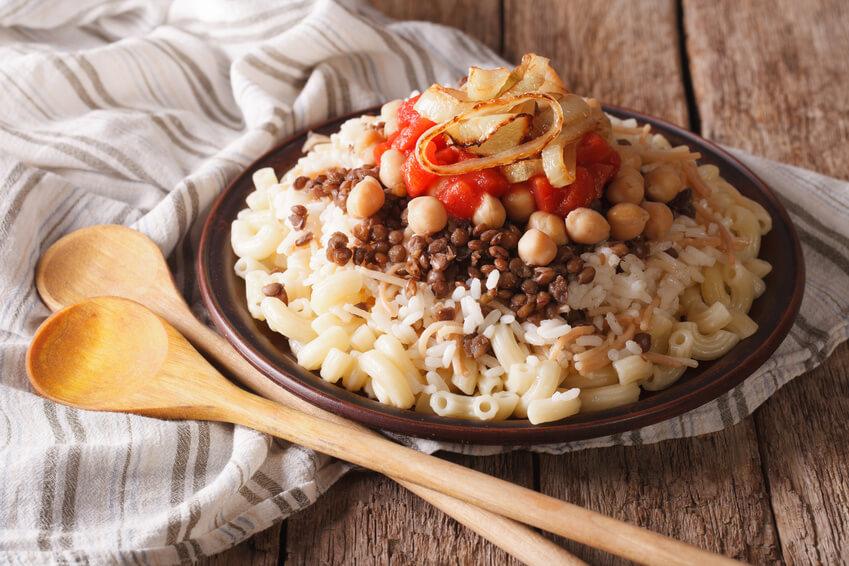 Many Egyptians consider kushari, a mix of rice, macaroni, lentils and spiced tomato sauce, to be the country’s national dish. Originating in the mid-19th century, this multicultural dish is based on cuisines encountered by Egyptian soldiers while touring in India and parts of Europe, though it is normally seasoned with traditional Egyptian herbs and spices. Delicious hot or cold, kushari is normally garnished with chickpeas and crispy onions, and sprinkled with garlic juice and hot sauce.

Egypt’s second-most popular dish is ful medames, a mix of crushed fava beans cooked in lemon juice, parsley, garlic, onion and chilli pepper. This simple vegetarian dish embodies the character of Egyptian peasant fare, and is always served with bread, which is used as a gamosa, or utensil, to help with eating. The dish is particularly popular in the northern cities of Cairo and Giza, so be sure to look out for it when travelling this region. 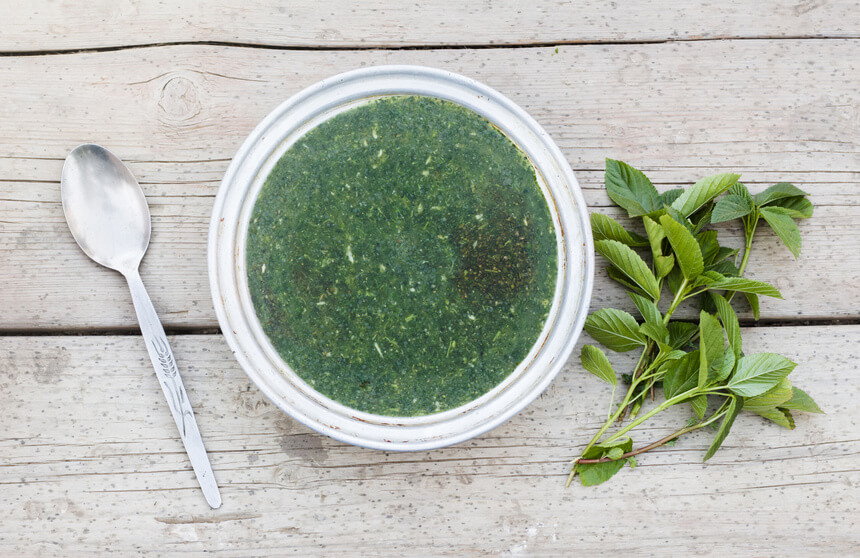 Molokhiya is a green, leafy vegetable which is chopped and cooked in stews with beef, chicken and rabbit, and normally served on a bed of white rice with a side of bread. The vegetable has a distinct, bitter flavour not unlike okra, and turns silky in texture when boiled or fried. In coastal areas, molokhiya is used to wrap up seafood before grilling, infusing the fish with delicious, aromatic flavour.

A traditional Nubian dish which originates from ancient religious ceremonies, fatta consists of layers of fried rice and bread, topped with tomato sauce, vinegar and meat broth normally made from sheep or cow brains. Though delicious, the dish is considered too complex and fattening for an everyday meal, so is normally reserved for special occasions and religious festivals. Many restaurants serve fatta, however, so you should have no problem finding it during your visit. One of Egypt’s most popular vegetarian dishes is Ta’meya, round balls of crushed fava beans fried in oil, herbs and spices. Similar to the Eastern Mediterranean delicacy of falafel, this delicious vegetable patty is normally served on a thin flatbread or pita such as eish baladi, and topped with salad, crispy onions and hot sauce. It’s often rolled up and eaten as a wrap or kebab, and is a popular street food option in major towns and cities.

Liver is one of Egypt’s most affordable meats, and is especially popular in Alexandria, the birthplace of the iconic Egyptian liver sandwich. Here, liver is chopped up and fried alongside bell peppers, onion, garlic, chilli and parsley, and served in a soft bread roll or baguette. Marrying Egyptian spice with the Western sandwich, this is one of Alexandria’s finest street food lunch options, and one of the country’s must-eat meat dishes.

Besarah is a fragrant vegetarian dish made from fava beans, ground into a thick mash or paste, and seasoned with dill, leek, green pepper, fried onions and spices. Occasionally, it’s served as a side dish alongside grilled meat or fish, but it’s primarily served as a main meal with Egyptian flatbread and green onions. In some parts of Egypt, you may find a thinner and lighter version of besarah, in which the fava beans have been blitzed into a runny paste to be used as a dipping sauce. 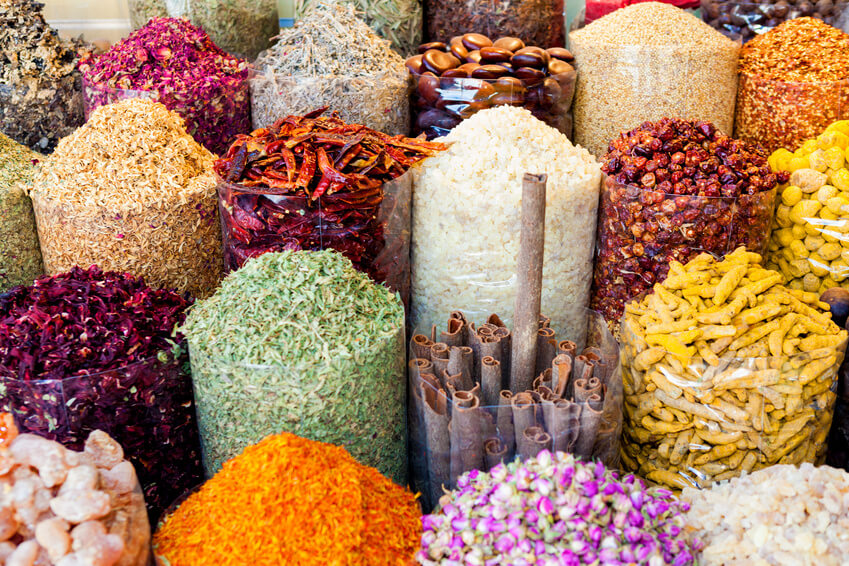 Served exclusively in coastal cities such as Alexandria, Portsaid and Suez; sayadeya is a baked fish dish comprising of a white fish fillet (usually bluefish, bass or lionfish) seasoned with parsley, cumin and spices. The fish is baked slowly in an earthenware pot alongside onion and a light tomato sauce, which allows the flavours to infuse the fillet. Once cooked, the fish is served whole with a side of yellow rice and eish baladi bread ­– perfect for an alfresco lunch within a stone’s throw from the Mediterranean coast.

Eish baladi is the national bread of Egypt, a thick, glutinous pita-style bread whose origins date back thousands of years. This is the iconic gamosa utensil of the country, served alongside most vegetable meals as a way to scoop up the food whilst providing sustenance and protein. Eish baladi is baked at extremely high temperatures, which causes the dough to puff up into an airy pita shape. This space allows the bread to be stuffed with filling, or flattened to use as a makeshift scoop. Be sure to try eish baladi during your visit, for an authentic Egyptian experience. Taking cues from the Italian frittata, the Egyptian eggah is a type of thick omelette made from a batter of eggs, parsley and flour, and cooked with fried onion, parsley, cumin and spices. Eggah is traditionally baked in the oven in a deep skillet, although other varieties now exist in which the dish is cooked on the hob, and served as a late breakfast or brunch. Traditional eggah is often served at lunchtime, with a side of tahini and mixed salad.

Originally hailing from the Middle East, bamia is a rich stew cooked with okra, tomatoes and spices,    and served alongside bread, rice and salad. The Egyptian variety usually contains cuts of lamb, which turn deliciously soft and tender over the long cooking time of the stew. Egyptians also add ta’aleya, a type of garlic cooking sauce, to enhance the flavours of the dish, as well as coriander, cardamom and onion. Bamia is actually the Arabic word for okra, one of the key ingredients of this rich and tasty dish. 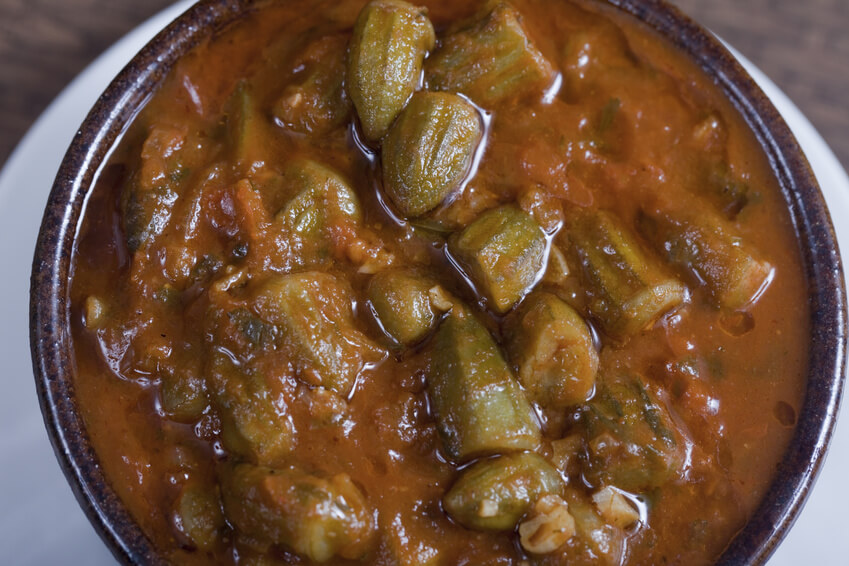 If you happen to be travelling through Egypt during the spring festival of Sham El Nessim, which usually falls on Easter Monday, you must sample feseekh, a sacred dish exclusively eaten during the festival, that dates back to Pharaonic times. Feseekh consists of fermented mutton, dried in the sun before being salted and stored over a period of months. The preparation of feseekh itself is held sacred among many Egyptians, with the process passing from father to son over generations. As is custom, the dish is served with brown baladi bread, olive oil, and onions.

Another street food favourite and must-try savoury delicacy, hawawshi is a type of turnover pastry dish, filled with minced lamb or beef, and marinated with pepper, parsley, chilli and onions. Similar to the Middle Eastern lahmacun, hawawshi consists of two round pieces of dough, pressed together around the filling and baked until golden brown. The dish is commonly made at home by working-class Egyptian families, and is also served as a popular street food, particularly in Alexandria and Cairo. 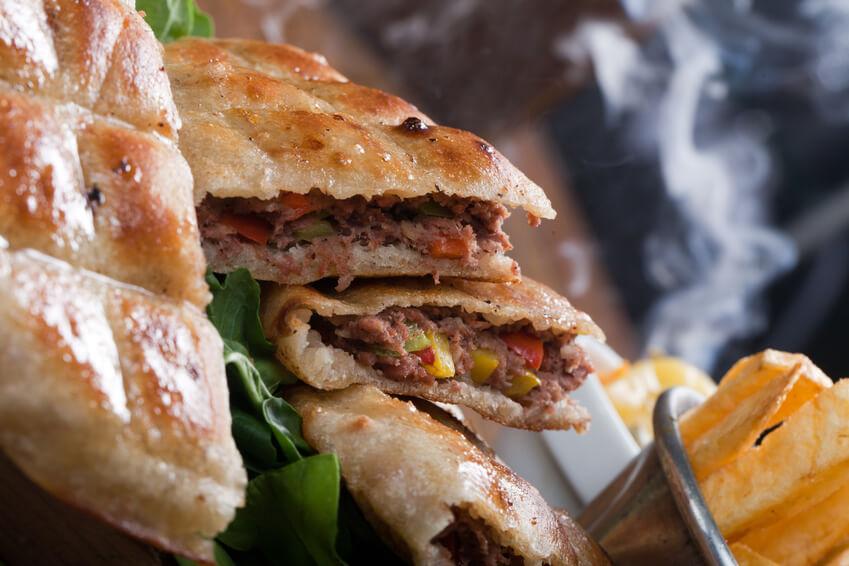 The Middle Eastern sweet delicacy of basbousa has become one of Egypt’s most popular dessert options, where it’s served with walnuts, syrup and cream. This sweet cake is made from semolina or farina soaked in syrup and pressed into a mould, before being baked in the oven. The syrup is often flavoured with rose or flower water, with dried coconut added to taste. As it’s vegan, basbousa is commonly eaten by Egypt’s population of Coptic Christians during periods of fasting. 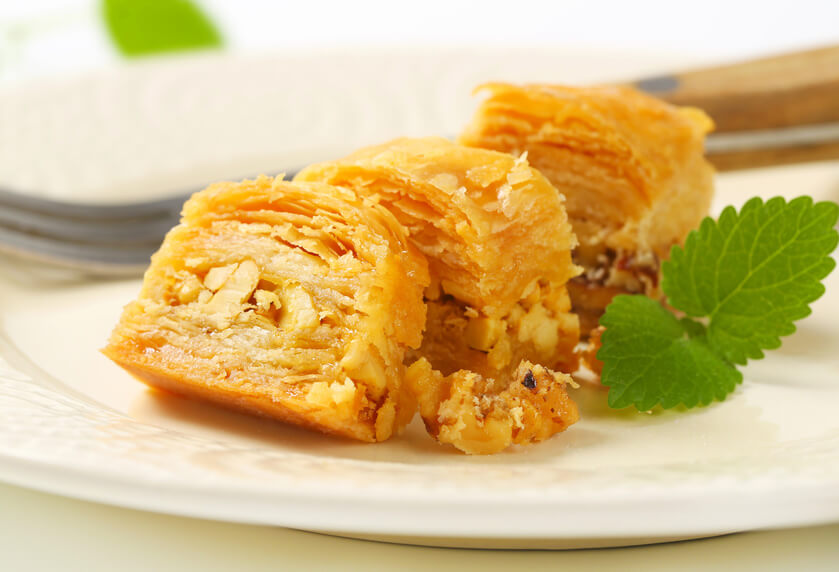 Originating in the Caucasus mountains at the time of the Ottoman Empire, baqlawa, also known as baklava, is a rich, sweet dessert made from intricate layers of filo pastry, chopped nuts and fruits. The dessert is held together by syrup and honey, and often served with a generous dollop of rich cream ­– a delicious conclusion to a traditional Egyptian feast.

Egypt offers a diverse roster of delicious eats for those open to new and exciting world foods. If you’ve long dreamt of exploring the historic riches of this wonderful country, take a look at our collection of escorted tours in Egypt or call our team today on 0808 231 3681.