A Journey Along the Longest River in Europe

The Volga River is one of Europe’s great geographical phenomena. This is Europe’s longest river, and the lifeblood of Russia — through which it flows for an impressive 2,300 miles, showcasing the country’s momentous cities and tranquil pockets of countryside.

It’s difficult to appreciate the sheer length of the Volga. The river flows from the Valdai Hills in central Russia all the way to the Caspian Sea, with its monumental watershed flowing through 11 of the 20 largest cities in Russia, including Moscow and St Petersburg.

And it’s not just length which makes the Volga so special. The river is intrinsic to Russian culture, particularly literature and folklore, and is affectionately referred to as ‘Mother Volga’ — it being one of Russia’s most celebrated natural wonders. For those longing to unearth the enigmatic treasures of Russia, the Volga provides seamless passage to the very heart of this proud nation. Here, we explore a handful of the river’s unforgettable highlights — from the Hermitage of St Petersburg to the historic splendour of Yaroslavl.

The historic second city of Russia, St. Petersburg was conceived in the 18th century by legendary Tsar, Peter the Great, who wished to establish a city to rival London, Paris and Berlin, and demonstrate the might and power of his Tsardom to the west. The city’s construction began with the magnificent Peter and Paul Fortress, a sprawling citadel whose Petrine Baroque architecture can still be enjoyed today.

Regarded as one of Europe’s most elegant and beautiful cities, St. Petersburg boasts a rich cultural tapestry, revealing centuries of Russian history and grandeur. During a visit, your first port of call ought to be the prestigious Hermitage, which is lauded as one of the world’s most significant museums and art galleries. The Hermitage Museum contains over three million objects, including the world’s largest collection of paintings, so you may be hard-pressed to appreciate the centre in its entirety during a single visit. Highlights include the Egyptian Hall with its classical antiquities, and The Pavilion Hall, where you can marvel at James Cox’s exquisite golden Peacock Clock.

St Petersburg is highly regarded for its architecture, and you’ll spot buildings of varying styles as you navigate the city’s wide, elegant boulevards. Explore Catherine Block and Peterhof’s Grand Palace. Discover St. Isaac’s Cathedral, the largest Russian Orthodox church in the city. Visit Yusopov Palace, where the mystic, Grigori Rasputin, was assassinated by nobleman in the early 20th century. And stand beneath the colourful domes of the Church of the Saviour on Spilled Blood, gazing up at one of the world’s greatest examples of Baroque and Neoclassical design. On the north shore of Lake Ladoga, close to the fascinating archipelago monastery of Valaam, is Mandrogi — an 18th-century Karelian mill town. Up until World War II, Mandrogi was a thriving settlement renowned for its fishing and milling trade, but the war left it a burnt ruin, with nearly all of its charming timber frame buildings destroyed by the conflict.

After the fall of the Soviet Union in 1991, a group of investors bought Mandrogi, and set about restoring the village to its original 18th-century condition. Today, Mandrogi retains all of its former splendour, and comprises a cluster of gingerbread house-style timber buildings, which reflect the pastoral customs of rural Karelia.

Wander amid the distinctive buildings of Mandrogi, and get a flavour for local traditions in this peaceful part of Russia. The village is home to several museums and visitor centres, as well as a number of charming eateries where you can indulge in the traditional shashlik, a type of Russian kebab.

Built in 1397, the Kirillo-Belozersky Monastery of Goritsy is one of Russia’s most significant and wealthiest religious sites. Though a sacred place, the history of the monastery is marred by violence and corruption, and was supposedly the site of a massacre in 1569, when Ivan the Terrible ordered the drowning of several nuns in the neighbouring Sheksna River. Indeed, the monastery site was intended to be the retirement home of Ivan IV, until his untimely death in 1584. After several centuries as a peaceful Russian Orthodox monastery, Kirillo-Belozersky was rocked by violence again in the 1920s, when the Bolsheviks transformed it into an agricultural cooperation, executing the nuns who occupied it. At the end of the 1930s, the monastery was shut down permanently, later becoming a museum of history, art and architecture. In the 1990s, a small community of nuns took up residence in the convent, and the site has since flourished as a Russian Orthodox commune once more.

Pay a visit to Kirillo-Belozersky, and you can delve deeper into the fascinating history of the monastery — from its ties to Ivan the Terrible to its history as a communist food cooperative. Despite being restored as a practising nunnery, the monastery is open to the public, and many artefacts remain from its time as a museum — lending unique insight into this fascinating religious site.

Welcome to the ancient city of Yaroslavl, whose extraordinary timeline goes back further than that of the Russian capital, Moscow. As the administrative centre of Yaroslavl Oblast, Yaroslavl has long been one of the most distinguished settlements in western Russia, and an integral part of the country’s cultural and historic identity.

Founded in 1010, Yaroslavl lies on the site of a former Viking encampment, and was one of the great outposts of the Principality of Rostov Veliky. Once an independent state, Yaroslavl became a part of the Grand Duchy of Moscow in the 15th century, and for a time was Russia’s second largest city and its de facto capital. The city was (and remains) an important industrial centre, and lies at the centre of a network of highways, railways and waterways connecting Moscow, St Petersburg and other major Russian cities. 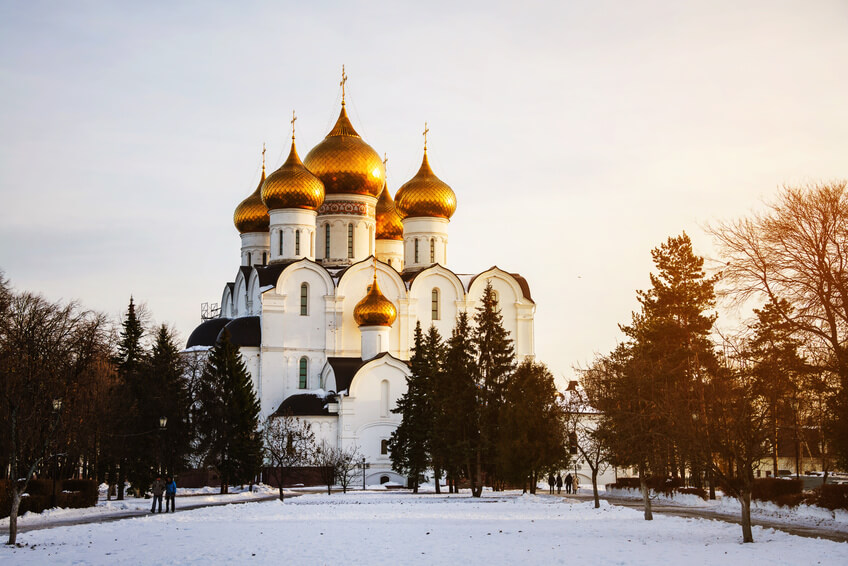 As you’d expect from a city with such an illustrious timeline, Yaroslavl is a centre for history and heritage, with much of its city centre designated a World Heritage Site. Wander among the captivating heritage buildings of this distinguished Russian metropolis, and enjoy such sights as the Museum of Music and Time, the Church of Elijah the Prophet, Tolga Monastery, the Governor’s Garden, the Yaroslavl Art Museum and, of course, the historic 19th-century Yaroslavl Zoo.

Powerful and distinguished, Russia’s prominent capital, Moscow, exudes the might of the country in its domineering architecture and impressive history. From Red Square to the Bolshoi Theatre, many of Russia’s most iconic landmarks can be found in the capital — making it an essential must-see during a Volga river cruise.

The undulating heritage of Moscow is near-impossible to capture, with the city playing a significant role in many of the key historical events of the past 1,000 years. From its golden age under the rule of Ivan the Great to its time as the capital of the powerful Soviet Union, whose Red Army were stationed in the world-famous Red Square; Moscow has been at the forefront of European history for generations, gifting the city an unfathomable depth of history and some of the world’s foremost heritage attractions.

Negotiate the fine streets of Moscow, and you’ll stumble across iconic landmarks at every turn. Start your tour at the fabled Red Square, whose highlights include Saint Basil’s Cathedral, the Kremlin, Lenin’s Mausoleum, Kazan Cathedral and GUM, a historic communist department store. Then, seek out its other famous sights, including the beautiful Bolshoi Theatre, considered the birthplace of ballet, and the fascinating Memorial Museum of Cosmonautics, where you can trace the heritage of the great space race fought between the Soviets and the Americans.

Stretching through the heartland of Russia, the Volga River allows you chance to enjoy the country’s unforgettable highlights in a seamless journey of discovery. To browse our complete collection of Russian river cruises, click here or call 0808 231 6637, and our team will be happy to help.