Before the formation of the Austro-Hungarian Empire, and the unification of Pest, Obuda and Buda soon after, modern Budapest remained physically and culturally divided on opposing banks of the Danube. Upon merging into one urban collective, however, something of a cultural boom occurred on both sides of the river, with the newly established city taking inspiration from Vienna, Paris and other Western European capitals.

Occurring in the latter decades of the 19th century, this relatively short-lived period of cultural opulence was dubbed the Belle Époque; an era celebrated for its economic prosperity, cultural innovations and overarching peace throughout Europe. For Budapest and other capital cities on the continent, the Belle Époque saw the development of a new aesthetic that reflected the growing optimism and decadence of the age — something which subsequently lead to large swathes of the city being rebuilt in an opulent style that echoed the splendour of the French capital.

Despite the Belle Époque ending almost as quickly as it had started, and two world wars laying waste to urban areas across Europe; evidence of this grand old age is still visible throughout Budapest. To revisit this magnificent era yourself, here are six sites where it’s possible to step back into time to the Belle Époque.

First opened in 1910, just four years before the final curtain call of the Belle Époque, Párizsi Nagyáruház (literally translating as Paris Department Store) is a lavish, Parisian-themed department store whose ornate interiors marry perfectly with the decadence of the age. At the time, the department store was the first of its kind to open in Budapest, a fact which demonstrates the city’s progression and development during the early years of the 20th century.

Celebrated for its interesting blend of Art Nouveau and Neo-Renaissance architectural styles, the Párizsi Nagyáruház borrowed its affluent good looks from similar French structures of the time. Located on Andrássy út in the former city of Pest, Párizsi Nagyáruház sits at the heart of a neighbourhood rebuilt from the ground up to appear as Parisian as possible.

Teetering on the banks of the Danube, just steps from Széchenyi Square, Gresham Palace is the former headquarters of the London-based Gresham Life Assurance Company, who commissioned the building of this magnificent Art Nouveau building in 1904. The building, which opened in 1907, was named after Sir Thomas Gresham, an English financier and founder of the Royal Exchange in London.

Despite starting life as an office for Gresham Life Assurance employees, Gresham Palace was viewed as a grand architectural statement, and cemented Budapest as a hotbed for culture and opulence within Europe. Sadly, during the Red Army’s occupation of Hungary after WW2, Gresham became a decrepit apartment building for migrants of the People’s Republic of Hungary. It wasn’t until the fall of the Iron Curtain that Gresham Palace was restored to its former, pre-war glory, and is now a luxury hotel managed by Four Seasons Hotels.

Arguably the most beautiful and imposing building in Budapest (possibly even Europe), the Hungarian State Opera is a neo-Renaissance opera house located on Andrássy út — the Parisian-esque boulevard we mentioned earlier. First opened in 1884, the Opera is one of the earliest examples of Belle Époque era architecture in Budapest, and was designed by Miklós Ybl, a pioneering and hugely influential Hungarian architect. 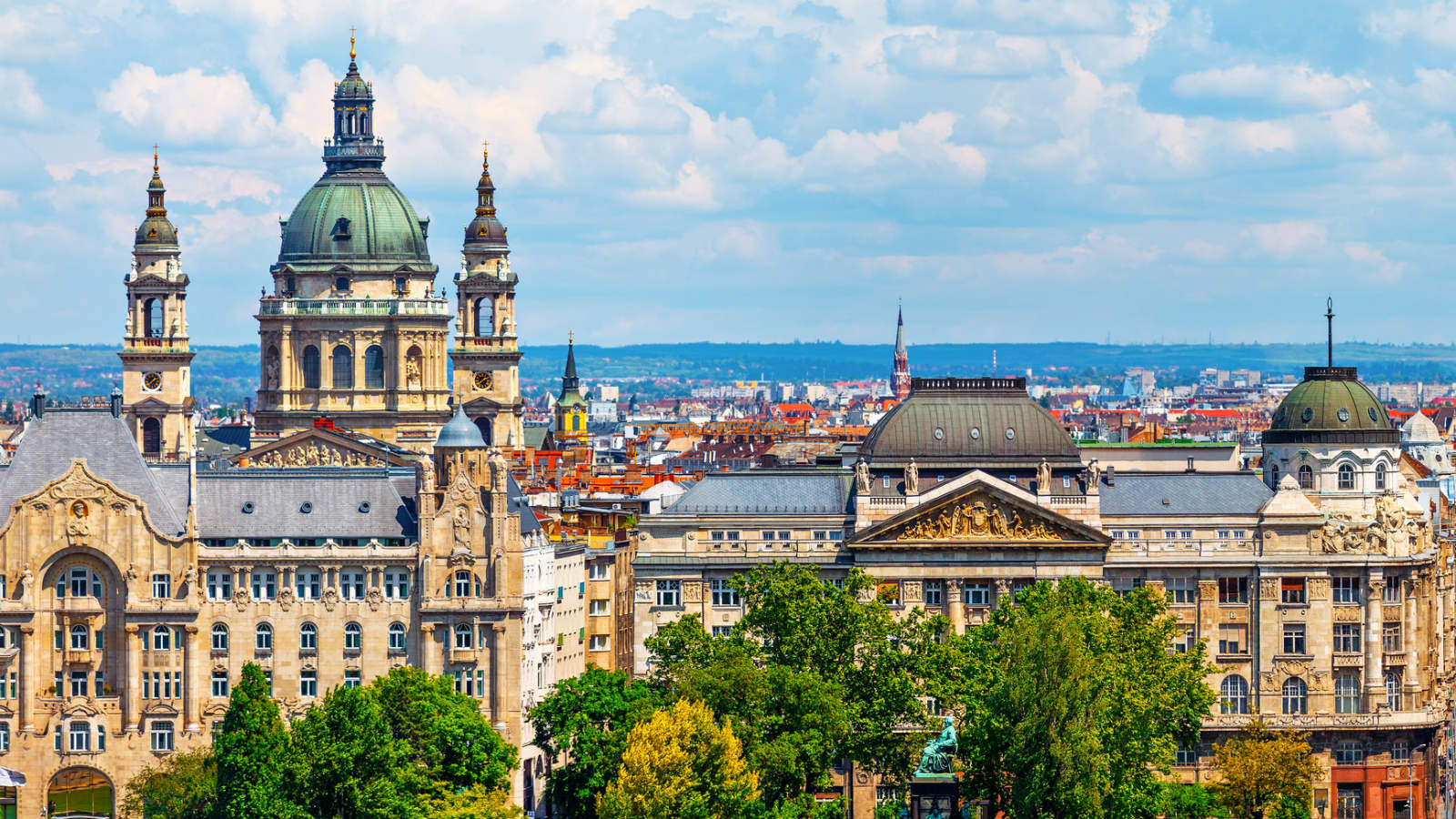 Dramatically designed and richly decorated inside and out, the Hungarian State Opera House features a vast quantity of paintings and sculptures depicting influential figures of Hungarian art including Mór Than, Károly Lotz and Bertalan Székely. Currently still in use as a concert venue, Budapest’s Opera is widely regarded as one of the finest in the world for sound acoustics and decorative beauty.

Constructed in the Art Nouveau style which became synonymous with Budapest during the Belle Époque, the Franz Liszt Academy of Music is a stunning art, education and music centre whose founder, Franz Liszt, began the academy from his home at the end of the 19th century.

After decades of expansion and several venue changes, the academy moved into its new home on the corner of Király Street and Ferenc Liszt Square in 1907. Today, the exterior façade of the building features a large statue of Liszt sculpted by Alajos Stróbl, whilst its interior is adorned with Zsolnay ceramics, frescoes and numerous statues of famous musicians and composers including Frédéric Chopin and Béla Bartók.

Not only does Budapest’s Museum of Applied Arts claim the mantle of the world’s third oldest applied arts museum, its architectural design is one of great interest and beauty, and features a number of Hindu, Mughal and Islamic designs — making it a truly unique Belle Époque era structure.

Built between 1893 and 1896, Budapest’s Museum of Applied Arts was originally designed by Ödön Lechner, an influential Hungarian architect often nicknamed the ‘Hungarian Gaudi’. Like all of Lechner’s creations, the museum is lavishly adorned with Zsolnay tile patterns, giving it a cosmopolitan spirit quite unlike anything built in Budapest before or since.

Often regarded as Budapest’s finest bathhouse, the Széchenyi Medicinal Bath is the largest medicinal bath in Europe, first opened in 1913 just months before the outbreak of the First World War.

Given its beautiful and opulent Neo-baroque style, the Széchenyi Medicinal Bath is widely regarded as the swansong of Belle Époque-era Budapest; a parting gift to the city before the war broke out and attitudes to needless decadence and splendour changed forever. After the war the complex was expanded, and architects at the time were careful to retain the ornate beauty which makes Széchenyi one of Budapest’s most treasured landmarks.

If you’re keen to take a step into yesteryear and explore Budapest’s Belle Époque gems, a Scenic river cruise on the Danube could be the ideal trip for you. Many of the city’s most historic buildings line the banks of this mighty waterway, making it easy to see the majority of Budapest’s architectural wonders.