Stand before the great kauri trees of New Zealand, and feel at one with the ancient living entities which have existed since the Jurassic period - over 190 million years ago. Steeped in legend, myth, and folklore, these forest giants are the spiritual grandfathers of New Zealand, held sacred by the indigenous Māori people and a symbol of the country’s deep connection with the natural world.

The sense of awe you’ll feel when surrounded by the soaring kauri is unforgettable. The mightiest specimens were mature when Polynesian settlers arrived in New Zealand during the Bronze Age, making them over 3,000 years old. From Tane Mahuta, the acclaimed ‘Lord of the Forest’ to Te Matua Ngahere and the ‘Four Sisters’ of Waipoua; the great kauri of New Zealand are some of the most ancient and beloved trees in the world. Now you can experience their might and wonder during a luxury escorted tour from Scenic.

To help you get a sense of the spiritual significance and natural splendour of these living wonders, here we introduce the legendary kauri forests of New Zealand. The Legends of Waipoua Forest

Waipoua Forest is the largest and best-preserved kauri forest in New Zealand. Located on the west coast of the mystical Northland Region, this ancient woodland boasts two of the largest living kauri trees, including Te Matua Ngahere, thought to be around 3,000 years old, and Tane Mahuta, which, at 51.4m, is the tallest of these ancient forest giants.

For thousands of years, Waipoua has been a place of deep spiritual significance to the Māori people, who believe the kauri are kings of the forest, governing natural life. The Māori used kauri gum (or sap) to create jewellery, and felled smaller specimens to build traditional waka (canoes). In 1837, the Māori sold Waipoua Forest to European settlers, who began logging the timber for export. Thankfully, this destruction ended in the 1950s when renowned conservationist, William McGregor, halted forestry in the region and successfully campaigned for Waipoua to be made a protected sanctuary.

Today, Waipoua remains New Zealand’s most sacred kauri forest, its trees residing in the domain of Tane Mahuta, Lord of the Forest. The forest sprawls from Hokianga to Paihia, and offers a wide array of hiking trails which bring you closer to these towering guardians. As a Scenic guest, you’ll stand beneath the canopy of Tane Mahuta, and hear stories from a local Māori guide about the myths and legends of this ancient forest – including the story of Ranginui and Papatuanuku, and how their son, Mahuta, created light and space in the world. 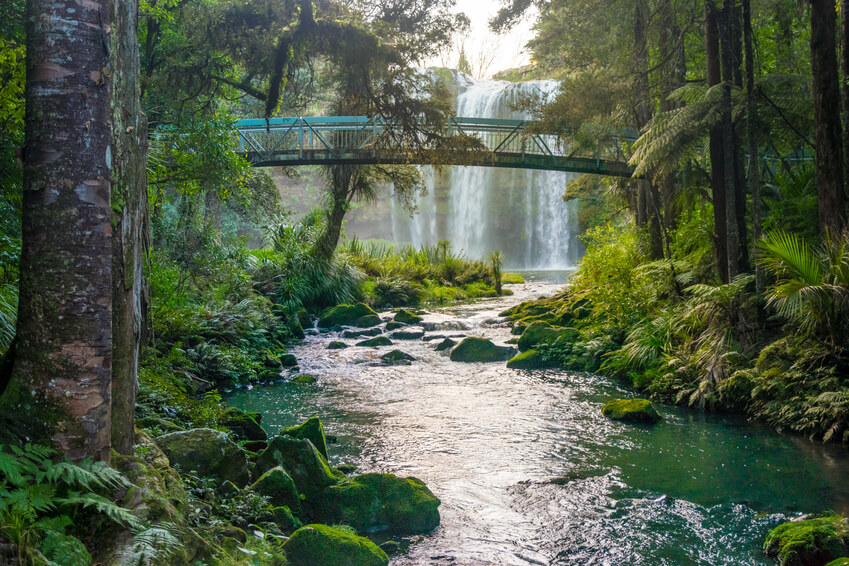 One of the best places to experience the primeval beauty and power of the kauri tree is within Whangarei’s A. H. Reed Kauri Park, located on the spectacular Tutukaka Coast. Within the remains of this ancient kauri forest is a stunning waterfall, plunging for 15 metres from a limestone step dwarfed by surrounding woodland. As a protected site, the park contains some of New Zealand’s oldest kauri trees, and ongoing conservation efforts to expand and redevelop the outlying forest mean that lands devastated by logging are now being restored to their former beauty.

Take in the serene landscapes from a tree-top boardwalk amid the ancient canopy of the kauri. The park is crisscrossed by wonderful hiking trails, including the 1,000-step route to the summit of Mt Manaia, where the intrepid can savour spectacular views over kauri woodlands and Whangarei Heads. For an in-depth exploration of the history of New Zealand’s kauri forests and their influence on local cultures and communities, visit the prestigious Kauri Museum in the charming village of Matakohe, located south of Waipoua Forest. The museum contains hundreds of fascinating artefacts and exhibits which tell the story of the pioneering days of kauri timber logging, including a full-scale circumference outline of one of the largest kauri trees to have ever existed, and the world’s largest collection of kauri gum and kauri timber furniture.

Whilst celebrating the once-thriving kauri timber logging industry, the centre also highlights the need to conserve the remaining kauri woodlands, and plays an active role in supporting conservation campaigns like the Waipoua Forest Trust. Currently, the centre is hosting an exhibition from acclaimed conservation and photographer, Stephen King, who is well known for his tree-top protest of the felling of native trees in the ancient Pureora Forest Park in the 1970s.

At Scenic, we provide exclusive encounters within New Zealand’s enchanting kauri forests, so you can savour the spiritual beauty of these majestic giants. To find out more, visit our New Zealand tours page or call our team today on 0808 231 9635.