Exploring Three of Europe's Most Beautiful Cities by Bicycle

Whether grocery shopping, commuting to work, or picnicking in the park; it’s no secret that Europeans love to cycle. From Amsterdam to Budapest, Bordeaux to St Petersburg, bicycles are a convenient, fun, and eco-friendly form of transport – not to mention a great way to see more of these beautiful cities than would be possible from a car.

Cycling gives you the freedom to explore at your leisure, attuning your senses to the sights, sounds, and smells of the city. Take your time, and experience the heritage, culture, and pace of the city as a local – for an immersive experience that will stay with you for a lifetime.

At Scenic, we believe there’s no finer way of discovering Europe’s majestic cities than from the saddle. That’s why all our luxury 5-star Space-Ships are equipped with Scenic e-bikes, helping you experience life as a local.

Our e-bikes are all equipped with motors, providing the easiest and most comfortable ride through the delightful towns and cities you’ll visit during your Scenic river cruise. Let the e-bike do the hard work as you navigate the streets, taking in the beautiful sights and culture.

To give you a taste of the benefits of cycling during a river cruise, here we explore three of Europe’s beautiful cities by bike. 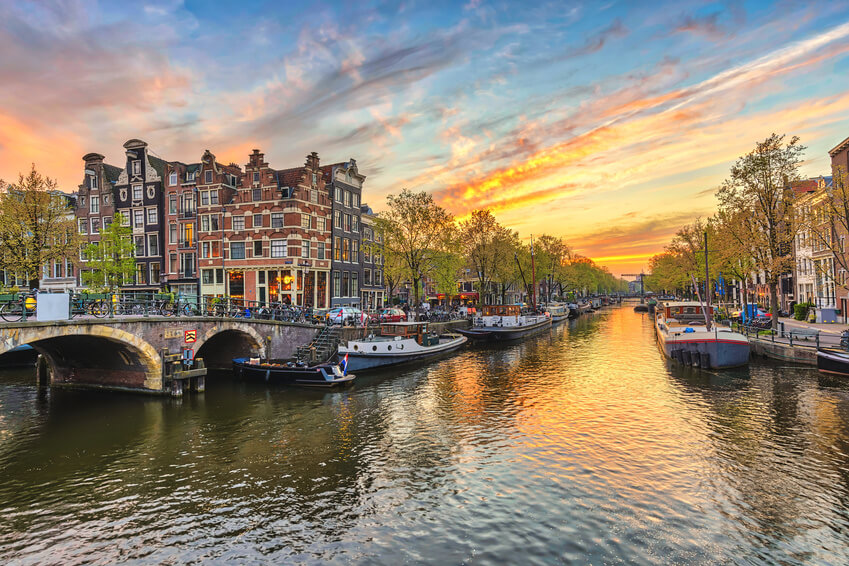 The Dutch capital is a cosmopolitan hub of intrigue and culture, interlaced with one of the most comprehensive cycling networks on the continent. It’s estimated that there are over 900,000 bicycles in Amsterdam – four times the number of cars – and that, collectively, the locals cover over one million miles by bike each day. In short, it’s the most bicycle-friendly city in Europe, and the perfect place to take your maiden outing on a Scenic e-bike.

Thanks to its extensive cycling infrastructure, it’s possible to explore much of Amsterdam’s historic centre by bike. Begin on the quiet canal-side paths of Centrum, where you’ll pass row after row of charming gable-fronted houses typical of the Dutch Golden Age. To the east of Dam Square and Centraal Station, you’ll find Anne Frank House, a biographical museum dedicated to the Jewish wartime diarist. From here, pedal east and take in the historic Westerkerk church, Royal Palace, Rembrandt House Museum, and the Portuguese Synagogue, before stopping off for refreshments in the beautiful Nieuwmarkt square.

Journey steadily south, bypassing the famous Bloemenmarkt flower market to pick up a bouquet of Dutch tulips. After passing the world-famous Heineken Brewery on Stadhouderskade, pedal to the Rijksmuseum, home to the world’s finest collection of Old Masters. Cycling through Museumplein north, you’ll reach the beautiful – and very bike-friendly – Vondelpark, one of the most beautiful green spaces in the city. Spend time exploring the ponds, gardens, and open-air theatre, before working your way back to your Scenic Space-Ship via De Pijp, the Botanical Gardens of Amsterdam, and the historic enclave of Wittenberg.

Top Tips for Cycling in Amsterdam

To enjoy a stress-free self-guided bicycle tour of Amsterdam, here are a few things to remember when cycling in the Dutch capital: With 125 miles of dedicated cycle paths and counting, Budapest is vying for the accolade of Europe’s up-and-coming capital of cycling. The Hungarian capital is a dream to explore by bike, its distinct architecture and wide boulevards mean there’s never a shortage of beautiful things to catch your attention as you move around the city. And, thanks to the small electric motor fitted to all Scenic e-bikes, even the hills of Buda are accessible – meaning you can enjoy the sights and sounds of this esteemed city in one seamless journey.

Your journey begins on the banks of the Danube, whose riverside towpath is wide enough to traverse on two wheels. Savour spectacular heritage sites such as the Hungarian Parliament Building, Academy of Sciences, and Roosevelt Square, before heading east into the elegant former city of Pest, whose avenues are lined with impressive baroque palaces, galleries, and neoclassical theatres.

Cycling down Rákòczi ūt, visit the Jewish Museum, whose archives document the persecution of Hungarian Jews during WWII. Bypassing Koztársaság Ter park, take in the eclectic-style architecture of Keleti Railway Station, whose elegant façade was considered one of the best contemporary architectural designs of the late 19th century. Turn left and follow Rottenbillier U. to Andrâssy ût, a spectacular boulevard home to the Hungarian State Opera House, Oktogon square, and the Városliget.

Cycling across the exquisite Széchenyi Chain Bridge, switch on your e-bike’s electric motor to save your energy on the journey to Buda Castle, a World Heritage-listed Baroque palace at the summit of the city’s Buda Hill. From here, enjoy spectacular views of the city below as you cycle the winding, streets of the Old City, before enjoying a relaxing downhill coast back to the Danube River bank.

Top Tips for Cycling in Budapest

Here, we offer tips and advice for those thinking of taking a Scenic e-bike for a ride in Budapest:

Experience Budapest: Gems of the Danube 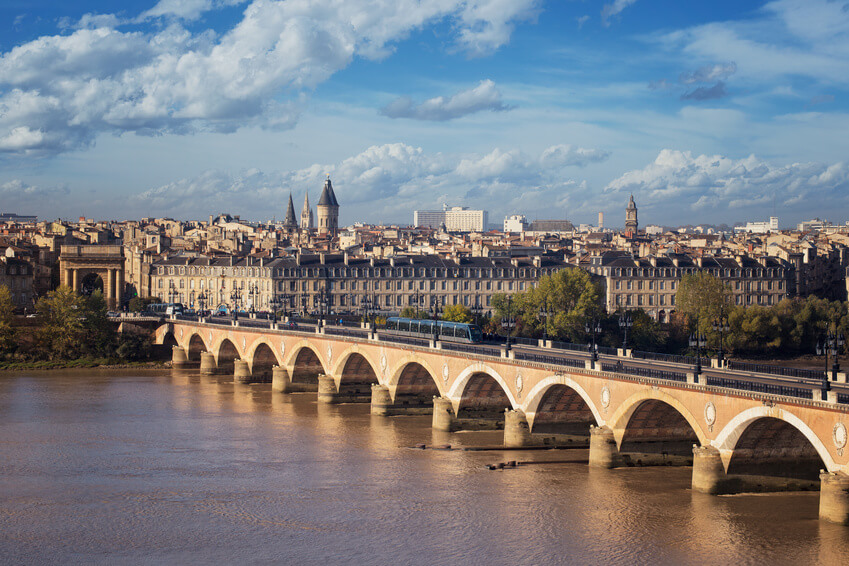 The beautiful French centre of Bordeaux is Europe’s 4th-friendliest city for cyclists, marrying miles of dedicated cycleways with ample parks and green spaces where traffic simply isn’t an issue. Peruse the World Heritage-Listed centre at your leisure, skirting the banks of the Garonne River to visit captivating heritage sites, before leaving the saddle to enjoy a taste of the region’s fine wine and delicious cuisine – what better way to experience the charms of this wonderful French city?

From the elegant banks of La Garonne, the city is yours to discover. Cycle through the elegant Place de la Bourse, savouring the captivating architecture of Miroir d’Eau, Musée des Douanes, and Espace St-Rémi. As you make your way west on the charming Rue de la Porte Dijeaux, cycle past the exquisite Baroque shopping mall of Galeries Lafayette, whose decadent interior is lined with high-end designer stores and boutiques.

Turn right on to Rue Louis Combes, and cycle past the Grand Théâtre and Maison du Vin, where you can sample a range of delicious Bordelais vintages. Continue on the Cours 30 Juillet, and spend time exploring the Monument aux Girondins and the adjoining Esplanade Des Quinconces. From here, re-join the riverside path on the banks of the Garonne, and take a slow cycle to the historic Palais Rohan, an ornate 18th-century palace close to Cathédrale St-André, Pont de Pierre, and the renowned Musée d’Aquitaine.

Take the Cours Victor Hugo through the heart of Bordeaux’s historic quarter, stopping to photograph the beautiful medieval spires of the Grosse Cloche, the oldest belfry in the city. Continue on the Rue St James and cycle through the beautiful archway of Porte Cailhau, before crossing Pont de Pierre to while away the rest of the afternoon in the majestic Jardin Botanique – an idyllic setting for a refined French picnic.

Top Tips for Cycling in Bordeaux

Interested in pedalling the historic streets of Bordeaux? Here are our top tips for safe, stress-free cycling in the city:

Exploring Europe’s cities by bicycle is a wonderful experience, and it’s made even easier with a Scenic e-bike. With their sturdy construction and optional electric motor, these bicycles make the perfect companion during an immersive self-guided city tour – helping you encounter cultural highlights and hidden gems like a local.

To plan your next luxury European river cruise, visit the Scenic homepage to browse our upcoming itineraries, or call our dedicated team today on 0808 252 7033.