Jewels of Russia: A Tour of St Petersburg's Architectural Gems

Though it’s not the only architectural style apparent in St. Petersburg, baroque design is certainly prevalent throughout the city. Characterised by a focus on light and shadow, opulent ceiling frescoes and ornate facades, baroque impacted what was the Russian Empire’s capital in the 18th century, helping to cement a 200-year legacy that produced some of the city’s most imposing yet enchanting buildings in the country.

Our Jewels of Russia itinerary lets you experience some of these architectural wonders first hand. Here, we’ll guide you through a selection of the city’s structural highlights that you might consider visiting during your time here. The official residence of Russia’s monarchy for 185 years, and arguably the city’s most famous building, nothing encapsulates St. Petersburg’s enticing three-century history and cultural richness like the Winter Palace.

Finished in the mid-18th century, the Winter Palace is grand and opulent to a fault. Richly adorned with columns and parapets, the palace stands 22 metres tall, with local planning regulations ensuring that no other building exceeds this height.

Today, the restored palace is part of the Hermitage Museum, the largest and oldest museum in the world. Home to a painting collection that’s without comparison, the museum boasts works from the prehistoric and Italian Renaissance to Spanish fine art and the post-Impressionists. 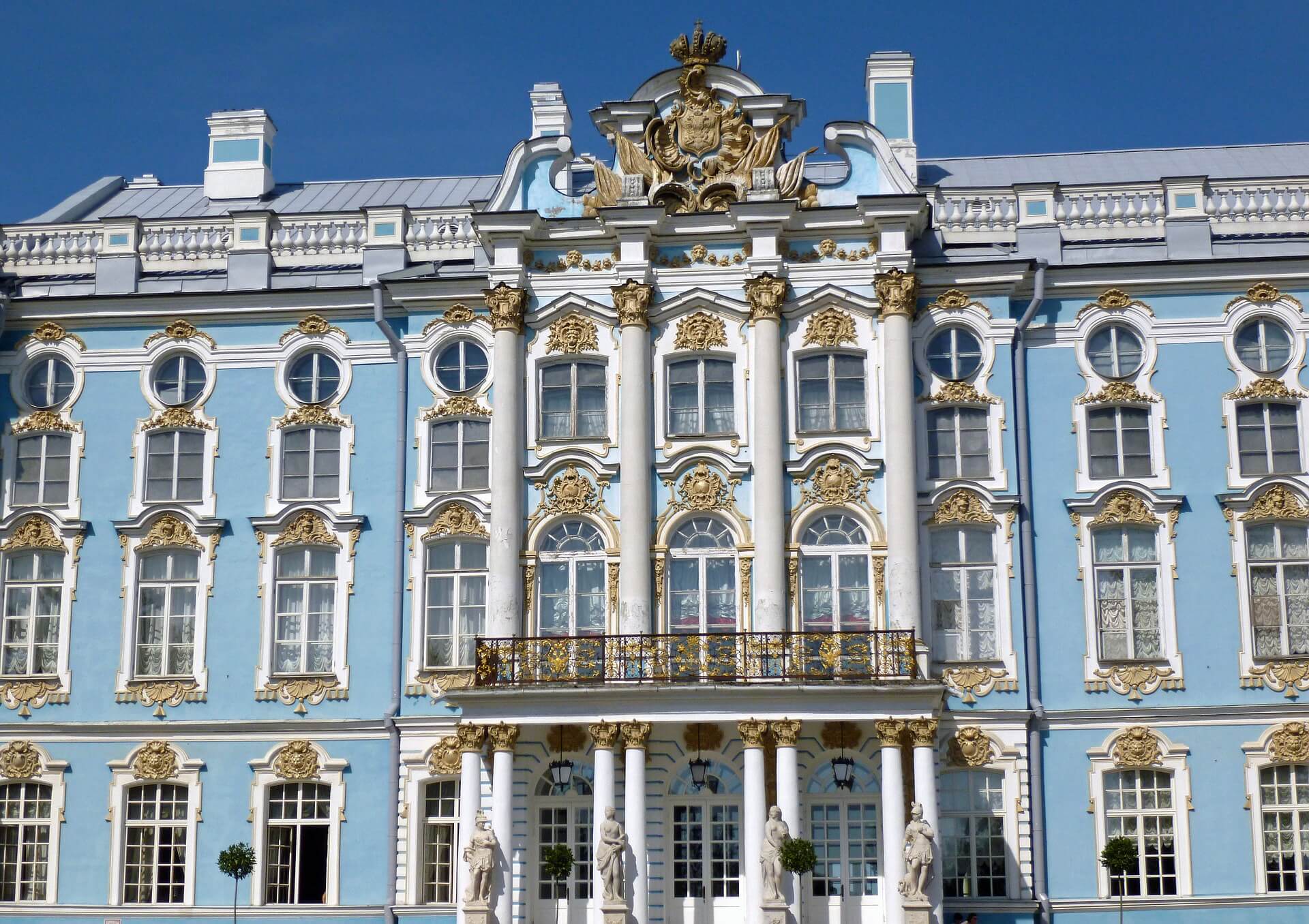 Modest might not seem like a word you’d use to describe Russian architecture, but Catherine’s Palace is, in the grand scheme, comparatively humble when matched with others of its kind.

Starting in 1743, the building underwent several reconstructions, including a huge overhaul by Bartolomeo Rastrelli, the Imperial Court’s Chief Architect. Rastrelli blessed it with intricate blue and white facades, and gilded highlights, helped in part by German architect Johann Franz Dunker. During the reign of Empress Elizabeth I, 100kg of gold was used to decorate the exteriors, a fact that perturbed Catherine the Great when she found out how much state funding was used to complete the building.

Its interior, highlighted by the Golden Enfilade, is a joy to behold. The Great Hall is just that: 1,000 square metres of awe-inspiring grandeur, affording superb views of the palace’s surroundings wherever you are inside.

Commanded by an enormous fresco entitled The Triumph of Russia, the Enfilade also features the Amber Room, a sumptuous and gratifying room radiating with amber mosaic walls that is almost overpowering in its splendour. Conceived by Peter the Great, Peterhof Palace’s completion was not without setbacks. Peter’s death brought building work to a halt, and his daughter’s ascension to the throne meant near abandonment.

Finished in 1755, it’s a monument of exceptional extravagance that’s tempered by surprising restraint on the outside. The lavish opulence of the interior is truly stunning; you’ll be met by the Ceremonial Staircase, unbelievably lush frescoes, and a number of gilded statues.

At times richly expansive, at others, stark and simple - wherever you turn, Peterhof Palace delights from all angles. 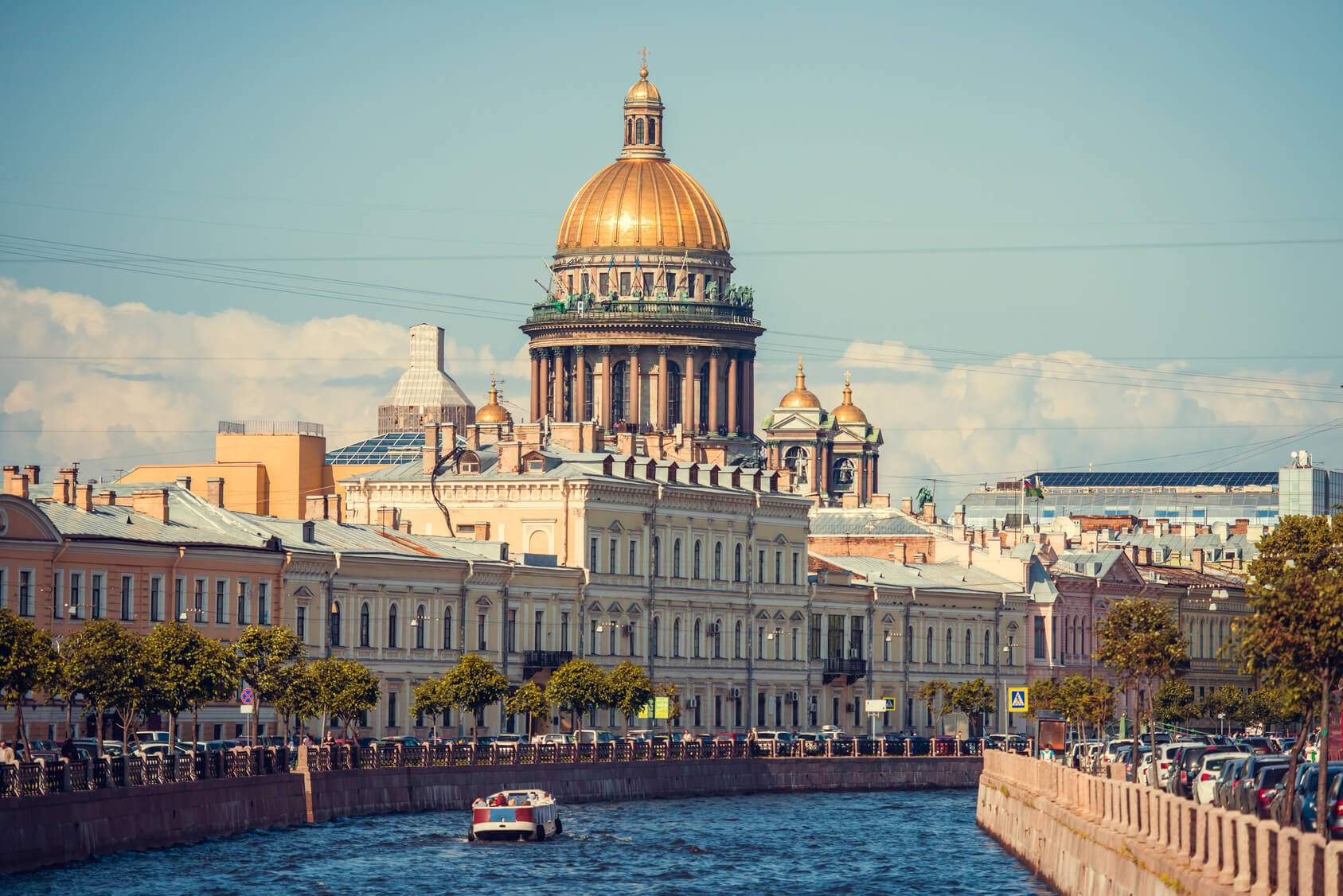 The largest Russian Orthodox cathedral in the city, and fourth largest in the world, St. Isaac’s Cathedral is a neo-classical marvel, and the subject of much architectural scrutiny before the 40-year build took place.

Nevertheless, St Isaac’s offers many delights for the eyes, with its centrepiece undoubtedly the large central dome. Accessible to tourists via a circular walkway, and encircled by 24 statues, along with a further 24 statues that look down from its roof, the Cathedral austere beauty is one to behold.

A delightful 112 columns dominate the exterior at various points: 48 at ground level, 24 on the rotunda’s uppermost dome, 8 on each of the four side domes, and 2 framing the four windows – creating a truly astounding aesthetic, boasting beauty and power.

Fascinating for a number of reasons, Yusupov Palace is steeped in ostentatious nobility and indelibly entangled with a murder that significantly altered the course of Russian history forever.

Informed by French architect Jean-Baptiste Vallin de la Mothe, with additional work from further architects, it’s a building of varied styles, but one of Russia’s few aristocratic homes to have retained its original interiors, unscathed and untouched.

Perhaps better known for its pre-revolution events than for its architectural traits, the murder of Grigori Rasputin looms large over the Palace’s reputation. A somewhat sensationalist tale, the story goes that the wealthy Yusupov nobles attempted to poison the Tsar’s close compatriot. Seemingly unaffected, Rasputin withstood two gunshots to the chest and back, before succumbing to a third shot.

If these architectural treasures have inspired a sense of Russia’s regal grandeur in you, please visit our dedicated Russian river cruises page, or for more booking information, call our helpful sales team on 0808 274 1366.