Monet in Giverny: Explore the House and Gardens Which Inspired the Great Artist

Besotted by its lush, verdant colours and idyllic serenity while passing through by train, Claude Monet made Giverny his home in 1883. Immediately, the father of the Impressionist movement transformed the dwelling into an extensively landscaped oasis that would become the subject of his most famous and iconic works.

Here, we’ll take you on a tour of one of France’s most famous residences, allowing you to get a sense of the wonder and life that suffused throughout Monet’s time here. Part of Scenic’s own Normandy & Gems of the Seine itinerary, this peaceful abode, bestowed with ‘Maison des Illustres’ and ‘Jardin Remarquable’ status, is yours to experience first-hand as you traverse the winding waterway it is situated on.

The house’s famous crushed brick façade, in stunning pink, immediately draws the eye, contrasting brilliantly with near-mint green window shutters and steps. In defiance of the staid greys that other houses were painted, Monet wanted the house to blend in with the abundant greenery of the garden.

At 40 metres in length, the house was complete with Monet’s very own apartment that featured a large bedroom and bathroom, a luxury that afforded him a place to work free from distractions when he needed. That said, Monet mostly painted in the open air, preferring the serenity and freedom it provided.

As with his paintings - bold, strong colours remain a focal point of Monet’s former abode. The tour begins in the blue sitting room, a place where his wife would read to his children. Chosen by himself, the vibrant hues attune perfectly with the Japanese woodblocks dotted around the room that Monet avidly collected. Likewise, the dining room’s brilliant yellow shade creates an utterly mesmerising effect, a result of Monet’s disdain for the dark, heavy fashions of the Victorian era, while the kitchen’s blue tiles contrast with the warmth of its extensive copper kitchenware.

Outside, the gardens are divided into two separate parts, both restored to Monet’s own specifications. As Monet’s career took off, the riches he earned from the sales of his paintings allowed him to buy the home, and its surrounding land in 1890. Something of a passion project for the now-prosperous painter, he wrote instructions to his gardener every day, detailing his visions and remaining its architect, even after he hired seven other gardeners. The first part of the garden, The Clos-Normand, was the culmination of his vision of Giverny, a flourishing, leafy expanse which he could capture in his paintings, free from the formal painting restrictions of more mannered studio projects.

Divided into flowerbeds whose clumps of varying heights housed daisies and poppies with rare, exotic varieties, the iron arches are undoubtedly the centrepiece, overseeing the central alley, creating an almost ethereal tunnel of climbing roses. Ever the impressionist, Monet had no time for the constraints of more organised paintings, freely mixing and marrying colours, allowing them to blossom without restraint. 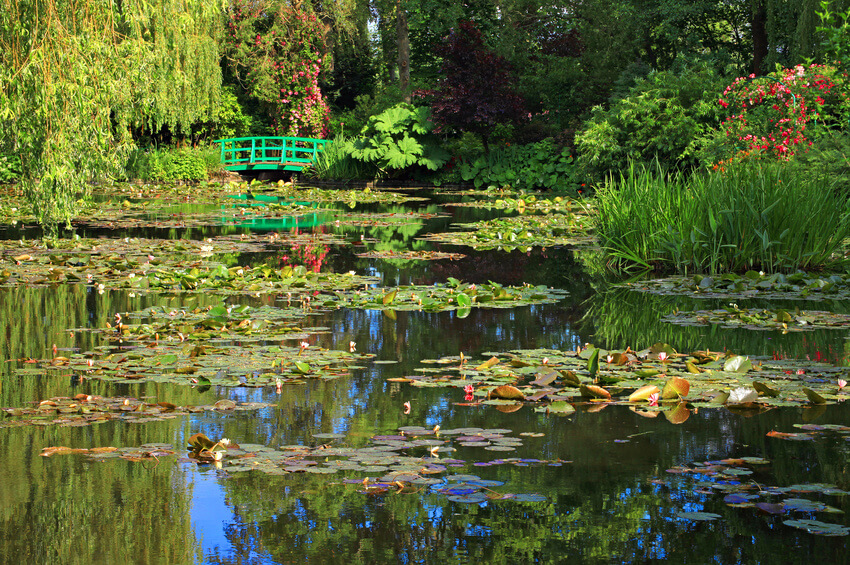 The garden’s second part, instantly recognisable as the focus of his legendary Water Lilies series, started off as a vacant piece of land that morphed into an embodiment of Monet’s fascination with Japan, evident in its famous bridge, bamboo wood, lilies and weeping willows.

Before putting them on canvas, the painter shaped the world before him with artful alacrity, a testament to his love of nature. Indeed, he was quoted as saying “All my money goes into my garden”, while a gardener was employed for the sole purpose of ensuring the garden looked its finest, with not a flower out of place.

Besotted with botany in the same way Monet was? Delve into a world of wonder as part of Scenic’s Normandy & Gems of the Seine itinerary, or for more information, call our helpful sales team on 0808 274 3401

Laura Barlow-Edwards
Laura is Scenic's Digital Marketing Exec. She loves travel; her first river cruise was on the Danube, and she fell in love with Budapest at first sight. In her free time, Laura is usually reading, travel blogging, or planning her next adventure.
Tags: France Gardens Giverny Monet