Magical forests, where a sudden appearance of Little Red Riding Hood or a woodcutter or mysterious elf would probably seem unsurprising; the bustle of modern cities; old castles on the skyline. All these and more were packed into a week of gently floating along the Rhine on board the Scenic Opal, surely the most luxurious of luxury river ship.

I joined the vessel in Amsterdam. It was an all-inclusive package whereby drinks, excursions, personal laundry and room service were included in the price so travellers’ accounts stayed at nil throughout. Browsing through the cabin (suite with balcony and a bathroom vanity unit to satisfy Kate Moss), I came upon a list of services provided by the butler, Ratko. He would if asked: draw a bath, serve early morning tea, pack and unpack, clean shoes, organise theatre tickets and limousines and lay on cocktail parties in one’s cabin. Eat your heart out, Bertie Wooster. 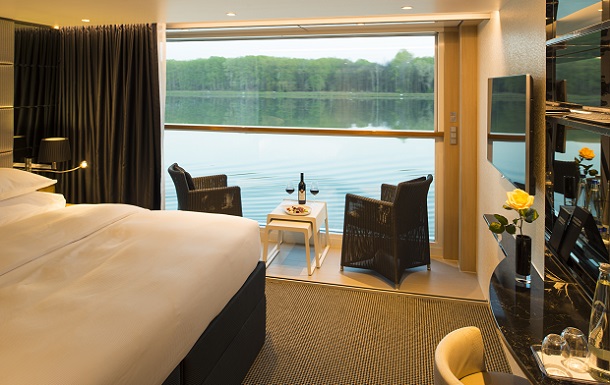 Unlike cruise liners, river ships can often offer only limited variety in dining but the Opal offered three different dining experiences on board with the main dining room, a much smaller one devoted to fine food and a gourmet table. On my first night, however, I was tired from the journey from Devon to Amsterdam, unpacking and absorbing all the cruise literature so I opted instead for room service after which I slept like a log.

The next day the choice was between visiting Volendam and Edam or a city tour of Amsterdam. I chose the first and was surprised to find how small Amsterdam was, the coach taking us beyond the city in less than 20 minutes. Edam is a small dormitory town full of gables and churches. The Reformation in that country is called the Alteration, with protestant churches displaying swans and catholic churches crosses.

Volendam was a huge contrast, with narrow, cobbled streets where cycles, cars and vans weaved in and out among pedestrians. Between the two towns we stopped to watch cheese being made but I eschewed the local delicacy of raw herring.

By lunch we were back on board and on our way to Cologne serenaded by a string quartet. Several times all went dark as we passed between the walls of locks, sometimes with what felt like inches to spare, then the sun would again be sparkling on clear water as the boat glided along, then real darkness came and with it the lights of the towns through which we passed seeming sometimes close and sometimes distant.

In Cologne we toured our first schloss, Drachenburg Castle. It is a bit of a fake having been constructed in the 19th century and without any real history but the next one, when we had moved on to Cochem, was Reichsburg Castle which had a long history beginning with 11th century monks and ending with the Nazis and post war apprentice training. German history was distilled in that one magnificent schloss. 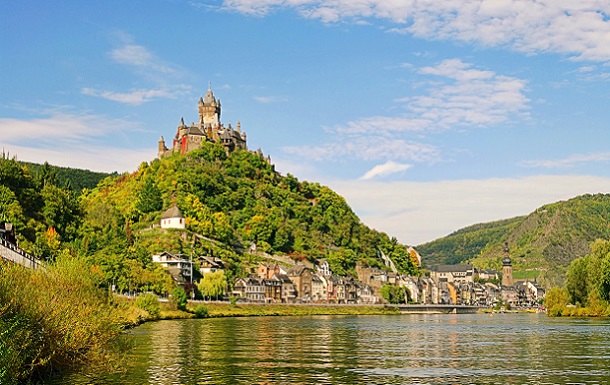 In the afternoon of day four we passed through the Rhine Gorge, with its breath-taking scenery and the famous Lorelei Rock. A detailed commentary was provided but I was content merely to stand and stare.

One of the advantages of river cruising is that you get off the ship every day rather than endure days on end of grey sea but there was still plenty to do on board with talks, evening entertainment which was a mix of in-house and local to wherever we were, a small library and a fitness centre. I had credit to spend and the beauty therapist was keen to give me a massage. I’d never had one, so I was tempted. After all I am approaching 70 and a bit less supple than I was a few years ago. So, I treated myself.

By now it was Saturday and we were arriving in Rudesheim. I went up to the reception desk to ask for details of church services next day and was met with an amazed stare. It is not a difficulty I have ever encountered before either on ocean or river cruises but clearly on some ships such information has been discarded along with Gideon Bibles. The resourceful chap at the desk went on the internet and embarked on a long hunt in a city full of churches.

Rudesheim offered the best shopping of the trip and as nobody does Christmas as the Germans do, I came back with some wonderful additions to my decorations. The biggest tourist attraction was Siegfried’s Musikkabinett, a whimsical museum of automated musical instruments.

The ship laid on a barbecue lunch and the sun blazed down so hard that I put my napkin over my head.  The staff brought drinks unfazed, as if Lawrence of Arabia dropped in for lunch every day.

No tour of Germany is complete without a visit to Heidelberg and then came Germersheim and Rastatt where Scenic had organised a concert at the Palace. We returned to late night snacks and a sense that the fun was coming to an end. Our last stop was Strasbourg before the final destination of Basel. 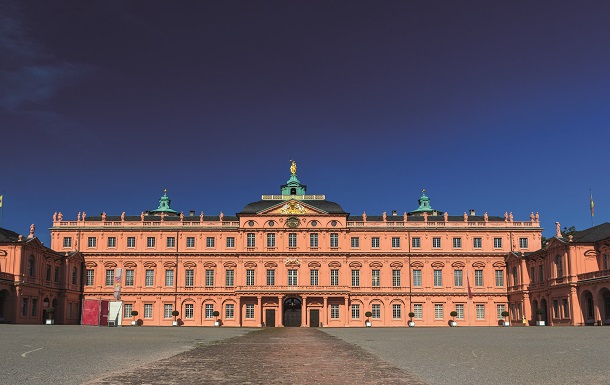 What happened next showed Scenic at its best. Long queues at locks suggested that we might be too late arriving at Basel for some of the flights home. We had already been issued with disembarkation instructions which now had to be re-written overnight as we were to put into another city instead.

Passengers scarcely noticed the changes as everything was organised with precision and, above all, without hassle. We were ferried to our destinations in a multiplicity of private pick-ups, taxis and coaches.

To follow in Ann's footsteps, view our selection of luxury river cruises on the Rhine, click here or call our team today on 0808 163 5512.

Ann Widdecombe is a former Member of Parliament, author and television personality.