Uncovering Lord of the Rings Filming Locations in New Zealand

Experience the Middle Earth of Tolkien and Peter Jackson's imagination in the heart of New Zealand's prized hinterlands.

It may be 17 years since the final instalment of Peter Jackson’s The Lord of the Rings trilogy hit our screens, but time has done nothing to wane enthusiasm for this fantasy epic. On the contrary, New Zealand, where much of the trilogy was filmed, continues to ride the wave of LOTR mania – reaping the benefit of increased visitor numbers to areas where the films were made.

On reflection, the decision to film the trilogy in New Zealand was a wise one. Few countries on Earth emulate the wild beauty of Tolkien’s Middle Earth quite like this far-flung nation, whose soaring mountains, white-water rivers and desolate plains seem lifted from the pages of The Fellowship of the Ring, The Two Towers and The Return of the King.

Lord of the Rings fan or not, there’s no denying the epic splendour of the films’ setting. Part of the trilogy’s success was in the use of real-life locations, many of which you can experience first-hand as part of an escorted tour in New Zealand with Scenic.

Here, we’ll be exploring the Lord of the Rings filming locations you’ll encounter in New Zealand, and providing information on a special Scenic Freechoice experience at the prestigious Weta Workshop – the studio behind LOTR’s award-winning special effects.

Lord of the Rings Filming Locations in New Zealand

Rugged, remote and geographically diverse, New Zealand was an obvious fit for reimagining Middle Earth for the big screen. Peter Jackson, a Kiwi himself, found inspiration amid the country’s rivers, lakes, mountains and valleys, with recognisable filming locations across the North and South Islands.

Once a quiet farming community on the shores of the South Island’s beautiful Lake Wakatipu, Glenorchy was transformed when Peter Jackson chose it as the location for several scenes in the Lord of the Rings trilogy. Now, the township is revered for its association to Jackson’s Middle Earth, its surrounding mountains, fens and waterways appearing throughout the franchise. So perfect a setting for LOTR was Glenorchy that Sir Ian McKellen (AKA Gandalf) reputedly said of it on arrival “this is the Middle Earth I had always pictured”. It’s within a stone’s throw of Glenorchy that you’ll find the setting for Isengard, the stronghold of Saruman the White. 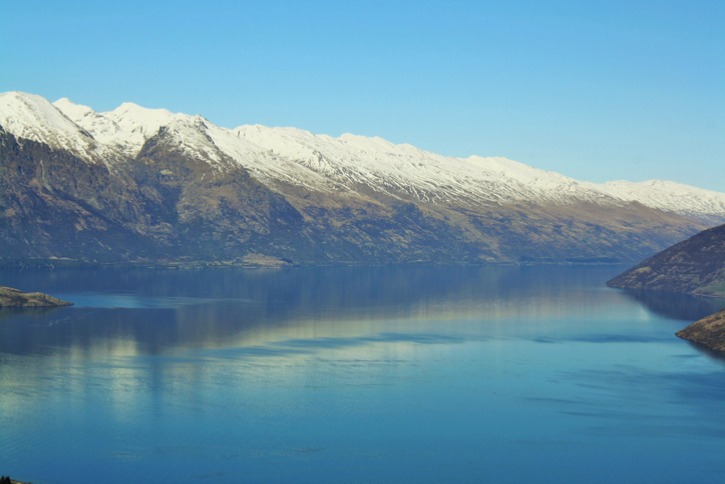 After Glenorchy, New Zealand’s Wakatipu Basin was the second-most important filming location in the Lord of the Rings trilogy, with countless scenes taking place in the region. Take one look at this dramatic wilderness, and you’ll understand why. Located in the extreme south of NZ’s South Island, this vast plain is surrounded by a continuous ribbon of mountains and peaks, evoking the rugged wilds of Gondor, Rohan and the Misty Mountains in the LOTR franchise. As well as its movie connections, Wakatipu Basin is also revered for its wines, with the vineyards of Central Otago producing some of the country’s finest Pinot Noir. 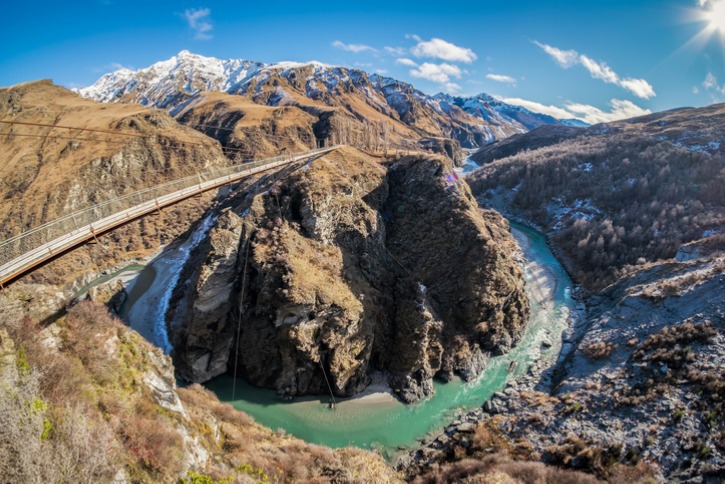 One of the most dramatic landscapes on the South Island, Skippers Canyon is a 14-mile gorge located to the north of Queenstown, a city viewed as the gateway to Middle Earth. With its spectacular road, which is among the most challenging routes in New Zealand, sheer slate cliffs and plunging, emerald-coloured Shotover River, Skippers was chosen for several scenes throughout the trilogy. Perhaps the most recognisable instance in which Skippers appears comes towards the end of the first film, when ‘the Fellowship’ are travelling down the River Anduin on route to Nen Hithoel. It’s a wonderful place to visit as part of a tour of the South Island’s LOTR locations, with far-reaching views and epic natural features.

Remarkable by name and nature, this impressive mountain range flanks the Wakatipu Basin, and was used throughout the trilogy to portray Middle Earth’s rugged, alpine backdrop. The Remarkables mountain range is one of the most popular spots on the South Island for outdoor sport and recreation, with hiking and nature trails aplenty. The range stands in for the Misty Mountains, Gondor uplands and Mordor frontier in the film series, its seamless string of towering peaks perfectly emulating the wilds of Middle Earth. 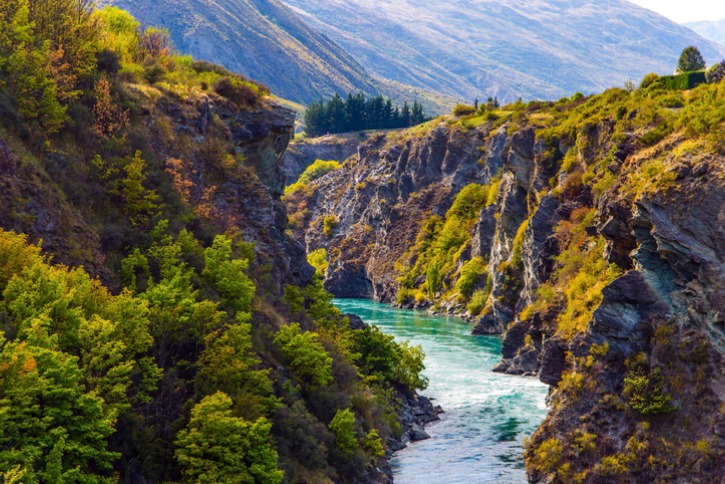 It’s easy to become transfixed by the majestic scenery of Kawarau Gorge. Within the foothills of the Remarkables Mountains, this verdant landscape appears like a postcard, with dense pine forests and towering rock formations bordering the powerful Kawarau River. Small wonder Peter Jackson chose it as the location for several scenes in The Fellowship of the Ring. LOTR fans may recognise the cliffs from the scene in which the Fellowship travels through the Argonath, or Pillars of the Kings, in their rowboats, bound for the shore of Nen Hithoel. The surrounding woodlands were also where scenes from the dramatic battle at the end of Fellowship were filmed. 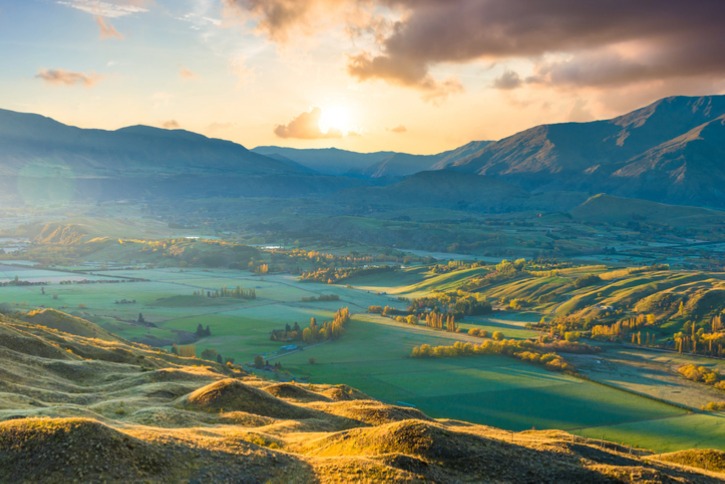 The charming town of Arrowtown is a highlight of New Zealand’s South Island in its own right, providing a fascinating snapshot into the country’s early origins. The town was established in 1862 at the height of the Otago Gold Rush, and this prospecting legacy remains an important part of its local heritage. History aside, Arrowtown served as the location for an important scene in the Lord of the Rings trilogy, its neighbouring plains serving as the location for the Battle of the Gladden Fields, in which Isildur acquires the One Ring from Sauron. With its imposing mountainous backdrop, it’s easy to see why the plains of Arrowtown were chosen for this significant turning point in the LOTR odyssey

Travelling to the North Island now, you’ll have the opportunity to visit the charming grasslands of Waikato, a place where Peter Jackson sourced inspiration for the Shire – the idyllic home of the Hobbits. Located close to Auckland, these grassy plains capture the pastoral image of Hobbiton and the Shire perfectly, with plenty of hills and peaks in which to frame the Hobbits’ subterranean homes. Indeed, the Hobbiton film set still exists in Waikato, and you’ll have the opportunity to explore its quaint homesteads and footpaths as part of a guided tour of the site.

Inside the Weta Workshop

Join us for a luxury escorted tour in New Zealand, and you’ll have the opportunity to visit the country’s legendary Weta Workshop as part of an unforgettable Scenic Freechoice excursion. Located in Wellington, one of New Zealand’s most cosmopolitan cities, Weta has grown to become one of the world’s finest movie studios – with Lord of the Rings among its best-known projects.

As part of an exclusive private tour of the studio, you’ll get up close to props, costumes and installations used in the Lord of the Rings trilogy, and have the opportunity to learn some of the secrets behind the films’ spectacular special effects. And remember, LOTR isn’t the only movie franchise Weta has worked on, so you can expect a few surprises along the way.

Whether you love all things Middle Earth or are visiting New Zealand for the landscapes alone, a luxury escorted tour from Scenic can help you see more of this extraordinary country. For more information or to book your place, visit the homepage or call us today on 0808 115 9188.