Art, history and exceptional architecture collide in Arles, a city and commune in the Bouches-du-Rhône department of southern France.

View Gallery (4)
Art, history and exceptional architecture collide in Arles, a city and commune in the Bouches-du-Rhône department of southern France. Located on the Camargue delta of the Rhône, this ancient city has a long and storied heritage, making it an immersive stop during a luxury river cruise on the Rhône.

Ligures, Celts, Romans and Andalusian Saracens — these are but a handful of the cultures and civilisations to influence Arles over a timeline dating back to 800 BC. Given its position close to the mouth of the Mediterranean, Arles became an important Phoenician trading port, before the arrival of the Romans in the 2nd century BC.

Under the influence of the Romans, Arles expanded into a major city with a direct canal link to the Mediterranean Sea. The city stood with Julius Caesar against Pompey in the 1st century BC, and was rewarded with great riches upon his victory. In the years that followed, Arles grew rapidly, possessing a number of significant Roman monuments, including a triumphal arch, amphitheatre, full circuit of defensive walls and a Roman circus. Evidence of many of these structures can still be seen in the city today.

After the fall of the Roman Empire in the 4th and 5th centuries, Arles fell into a period of decline. In 735, Andalusian Saracens sailed up the Rhône estuary from Spain, capturing the city with little resistance. The Moorish Saracens remained in Arles until 739, when Charles Martel, Duke of the Franks, ousted them from the city.

In the centuries that followed, multiple factions, including Vikings and Saracens, raided Arles, creating instability throughout the region. It wasn’t until the 12th century that Arles regained its economic prominence, when the Holy Roman Empire proclaimed it a free city.

Thanks to its position on the banks of the Rhône, Arles retained its significance as a major French trading port until the arrival of the railways in the 19th century, which diminished river trade and contributed to the city becoming something of a backwater.

It was this newfound peace and tranquillity which prompted van Gogh to resettle in Arles in 1888. Attracted by the provincial landscapes of the city, van Gogh enjoyed his most prolific artistic period during his time in Arles, producing over three hundred paintings and drawings. Many of his most prestigious works were inspired by the city, including The Night Café, Starry Night Over the Rhône, and Yellow Room. 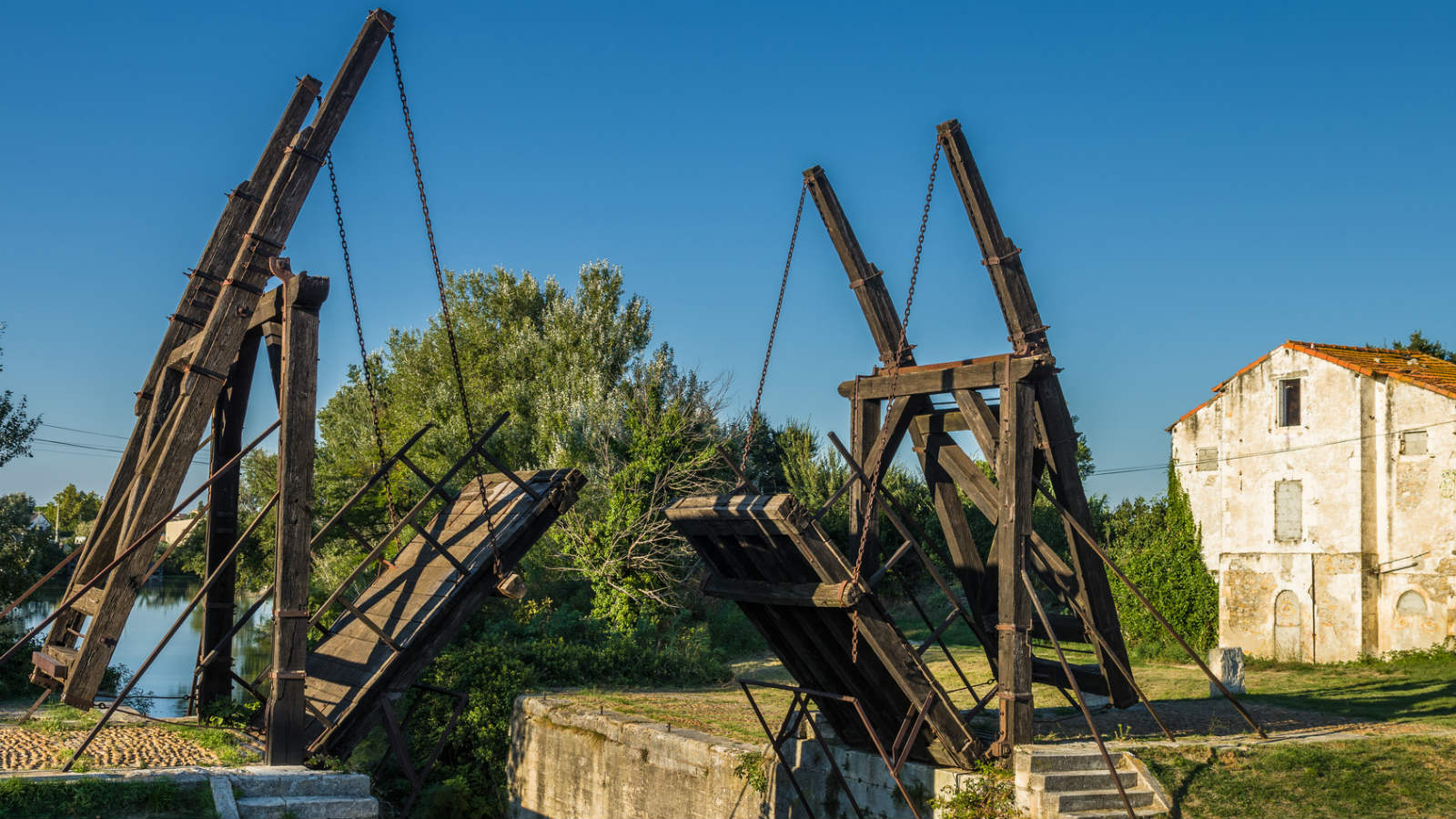 Possessing more art, history and architecture than is possible to absorb in one visit, Arles is a melting pot of culture and heritage. Here, we suggest several highlights you’d be a fool to miss during a stop off in Arles.

Of all the civilisations to settle Arles, the Romans had the largest influence on the city, expanding it into the major settlement we see today. As a result, Arles is home to several Romanesque structures and monuments, all of which occupy a part of the city known as the Roman and Romanesque Monuments.

First listed as a UNESCO World Heritage Site in 1981, Arles’ Roman and Romanesque Monuments collection features buildings from the 1st century BC, as well as newer structures from the 4th century. Highlights of the collection include the Arles Amphitheatre, the Roman theatre, the Baths of Constantine, and the Church of St. Trophime, all of which can be found within steps of one another in the heart of the city.

Established by Yolande Clergue in 1983, the Fondation Vincent van Gogh is a non-profit art foundation dedicated to showcasing the art and legacy of Vincent van Gogh, specifically the works created or influenced by the city of Arles.

Located steps from the banks of the Rhône, this contemporary art foundation serves as a space in which to exhibit the works of van Gogh, as well as celebrate his overarching artistic legacy. Alongside several original works by the artist himself, the centre also features a range of exhibits contributed by artists who have been directly influenced by van Gogh, including renowned Irish painter, Francis Bacon.

For fans of van Gogh, a visit to this fascinating centre is an absolute must.

Built in the 1st century BC, the Arles Amphitheatre is the most impressive Romanesque structure in the city. Outside of Rome, the amphitheatre is one of the best-preserved arenas of the ancient world, and would have originally been used to host chariot races and fierce gladiatorial battles. With two tiers, the amphitheatre is capable of seating 20,000 spectators, and is unique in its pronounced towers, which were likely added during the medieval period.

Today, the amphitheatre hosts bullfighting exhibits during the annual La Feria d’Arles festival, as well as plays, concerts and other productions during the summer months. 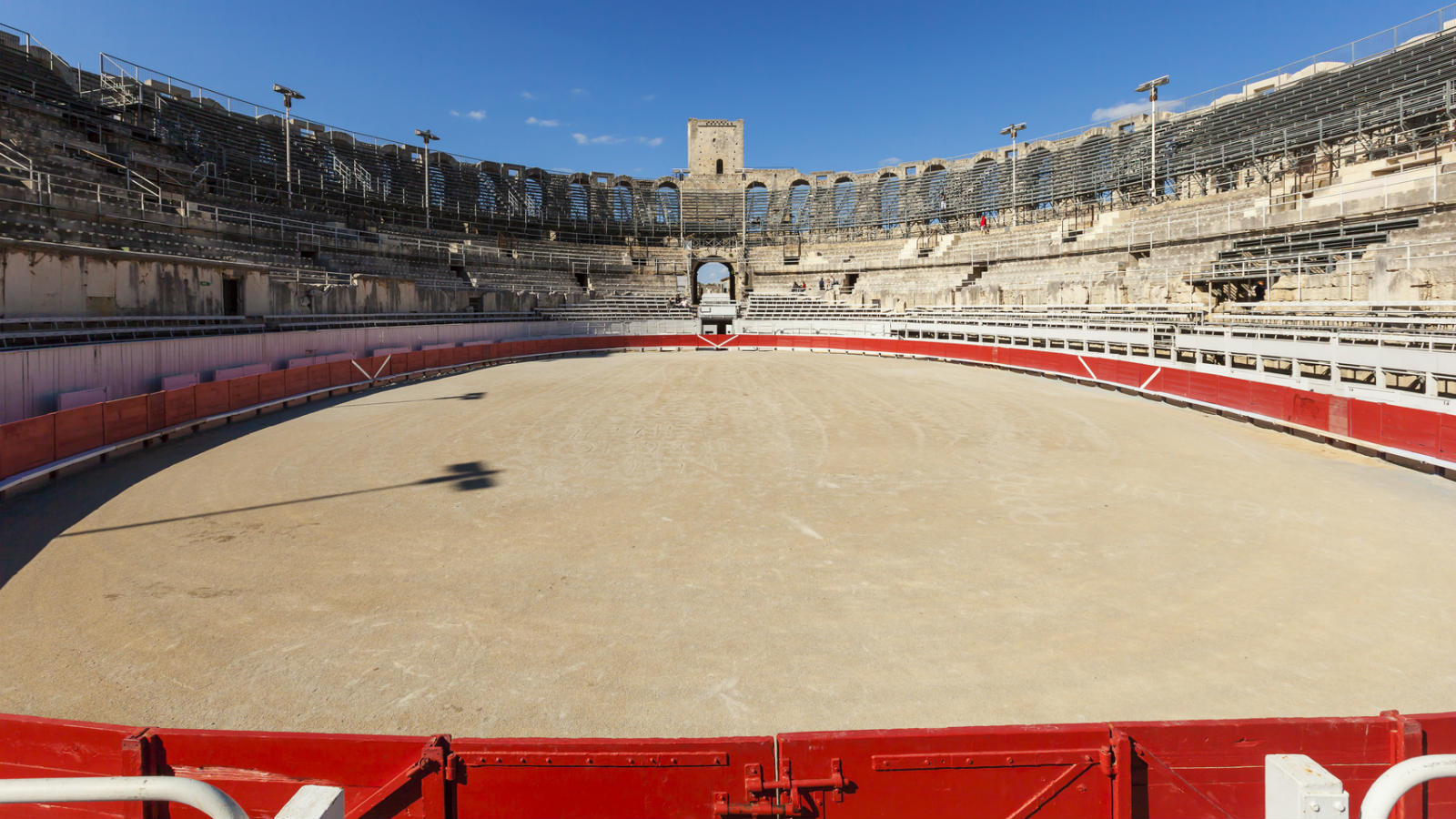 Venture beyond the limits of Arles during your visit, and you’ll find the Camargue Nature Park, one of the most distinctive natural reserves in France. Protected by UNESCO on account of its precious biosphere, this vast wetland is a major staging point for thousands of migratory birds, including egrets, herons and flamingos. The parkland stretches for hundreds of acres, and is best explored on horseback as part of a guided trail tour. Hiking is also very popular in Camargue, particularly around the spectacular ancient citadel of Aigues Mortes — one of the most imposing walled-cities in Europe.

Immerse yourself in the coloured antiquity of Arles at the fascinating Musée Departemental Arles Antique. This extensive history centre contains a vast collection of Roman artefacts, including a complete barge once used on the waters of the Rhône, and a bronze bust of Julius Caesar offered as a gift to the city at the beginning of the 1st century. The museum also houses several working examples of Roman water mills, described by historians as the greatest known concentration of mechanical power in the ancient world. If you’re interested in Roman history, this is an essential must-see.

While history offers the biggest distraction in Arles, the city has a shopping heritage to rival the big-hitters of France. Here are a few of the shopping experiences you can enjoy during a visit to Arles.

Arles-born designer Christian Lacroix stayed loyal to his roots, opening a boutique in his hometown in the late 1970s. Naturally, Lacroix’s flair for design led him to open several other designer stores throughout France, but Arles remains his flagship — offering designer garments and his very latest collections on one of the most historic and prestigious boulevards of the city.

Even if you’ve no intention of buying, Antiquités Dervieux is a pleasure to browse. This historic antique shop has been around since the 1880s, and specialises in provincial furniture popularised across France during the late 19th century. With friendly staff and a wonderfully eccentric interior, why not pay Dervieux a visit and see what treasures you can find?

If you’re lucky enough to visit Arles on a Saturday, be sure to make time to visit the Arles Saturday Market, one of the region’s most popular produce and craft fairs. This historic market has taken place for decades, and is the perfect place to stock up on local produce for the Scenic Culinaire experience. The market is located at the Boulevard de Lices, and is held every Saturday between 8am and 12.45pm.

Idyllic Rhône
Lyon to Marseille
You’ll have time to explore the cities of Avignon and Tarascon at leisure. Perhaps take a trip to Avignon Cathedral and Alpilles Natural Regional Park.
8 day
From (GBP)
£ 2,695
Discover

South of France
Lyon to Lyon
Over 11 days, cruise along the Saône and Rhône through the South of France in 5-star all-inclusive luxury. Highlights include Lyon, Avignon, Viviers & Beaune.
11 day
From (GBP)
£ 3,445
Discover

Idyllic Rhône with Highlights of Paris
Paris to Nice
10 day
From (GBP)
£ 3,905
Discover

Idyllic Rhône with Paris
Nice to Paris
Discover the beauty of the Rhône Valley with a 7 day all-inclusive cruise from Tarascon to Lyon before a 3 night stay in the romantic city of Paris.
11 day
From (GBP)
£ 4,155
Discover

South of France with Highlights of Paris
Paris to Lyon
13 day
From (GBP)
£ 4,555
Discover