As it stretches from the Swiss Alps to the Mediterranean Sea, the Rhône connects towns, cities and fascinating landscapes, before meeting the Saône in Lyon, the 'gastronomic capital of the world'

The Rhone is a beautiful, historic river that starts in Switzerland and flows into Southern France. It’s this route we follow on our Southern France river cruises.
The Rhone River starts in an Alpine glacier in Switzerland and it is the only major river in Europe to flow directly into the Mediterranean Sea. Its journey through Southern France makes for an absolutely idyllic river cruise route that takes guests through the most beautiful and historical french cities and landmarks. Artists have long been amazed by the Rhone River, with Vincent van Gogh even making it his subject in his famous “Starry Night Over The Rhone” painting.
People’s love affair with the Rhone goes back much further than the 19th century however. The Rhone’s location was of significant importance to many who fought for control of the region, with the Romans’ time in power, especially, having left a distinct mark in the architecture in many southern towns. Many cities were built alongside the banks of the Rhone and it’s these cities you’ll be touring on your Southern France river cruise.
You’ll notice evidence of a Roman past when our river cruise stops in Lyon, a city that lives where the Rhone and Seine rivers meet. Home to the grand Notre Dame Basilica and many secret cobblestone pathways, this medieval city will make you feel like you’ve stepped into a different century. Also considered the food capital of the world, you’ll be spoiled with the many French specialties available to you. You can’t possibly leave Lyon without trying one of their famous quenelle dishes.
One of the highlights of a Rhone river cruise through the South of France is our stop in Tournon. Located right on the riverbanks of the Rhone, this picturesque town is home to the 10th century “Musee de France” castle. It now houses the museum, and Scenic guests have the opportunity to enjoy afternoon cocktails on the terrace of this historic castle, along with a private acoustic set performed by local guitarists.
A river cruise on the Rhone River wouldn’t be complete without a stop in Avignon, home to the famous Palace of the Popes. Officially deemed a World Heritage Site in 1995, “The Palais des Papes” symbolizes the church’s influence on Western Christianity in the 14th century. It is the biggest Gothic palace in all of Europe and it directly overlooks the Rhone. Scenic has the exclusive privilege to provide guests with an after-hours musical performance at the Palace of the Popes, featuring music by the likes of Mozart, Vivaldi, Beethoven and Strauss.
In between stops in larger cities, Scenic guests will also have the chance to enjoy some of the best wine in the world and experience typical French life, with opportunities to visit local food markets (with a personal chef as your guide!), ancient cathedrals and monasteries, river lookouts, and an olive farm.
In all, our Scenic river cruise on the Rhone makes for one exquisite week in the South of France. Relax, take in the French culture, and create memories that will last long after our Scenic ship docks back in the harbour.
Scenic offers two unique Rhone river cruises, differentiating in length and itinerary, for your travel convenience. Explore them in detail here.

Your peace of mind

Defer your travel plans up to 60 days prior to departure with our Flexible Booking Policy available on river and ocean cruising.

Our commitment to each guest and crew’s health, safety and well-being remains our key priority.

Beaujolais and Burgundy, Vienne and Avignon, Lyon and Tarascon; these are but a few of the iconic destinations you can visit during your time on the waters of the Rhône, each as unique and enchanting as the last. As the Rhône makes steady progress towards the Mediterranean, its banks reveal a land of outstanding contrast, where world-renowned cities are bordered by some of Provence’s most esteemed beauty spots, giving you a wealth of cultural highlights to explore.

Your journey begins in the charming town of Chalon-sur-Saône and on to heart of the ‘Golden Stone’ region of Beaujolais, where you can enjoy an exclusive wine tasting. Lyon is the next stop on your itinerary, and you’ll discover just why the city is heralded as the gourmet capital of the world.

From there, you’ll journey steadily south, calling at Vienne, Tournon and Viviers before arriving in Avignon, home to the wonderful Palais des Papes. Tarascon is the last call on your itinerary, and the perfect place to soak up the Rhône’s vibrant Roman-age heritage. 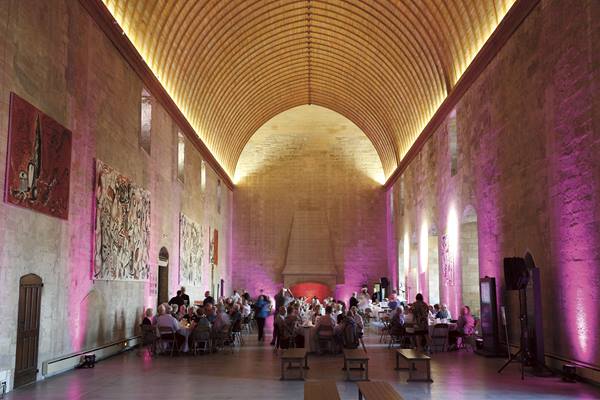 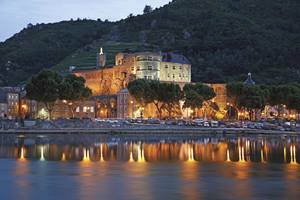 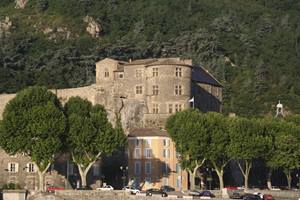 Sail on the Rhône with Scenic and you’ll enjoy a collection of exclusive events which offer authentic encounters not available to the ordinary traveller. Our Scenic Enrich experiences and Scenic Freechoice excursions take you to the very heart of local French culture, and they’re all included in the total price of your luxury Rhône river cruise.

Scenic Enrich - Palais-des-Papes
Be treated to a truly unforgettable experience at the prestigious Palais-des-Papes of Avignon as you enjoy a classical concert and exclusive gala dinner.

Scenic Sundowners - Tournon Castle
Enjoy an afternoon aperitif on the terrace of the castle accomanied by local musicians as you over look the Rhône.

Scenic Enrich - Scenic Rouge
Experience the French extravaganza that is the can-can, among other performance at the exclusive gala spectacular, Scenic Rouge 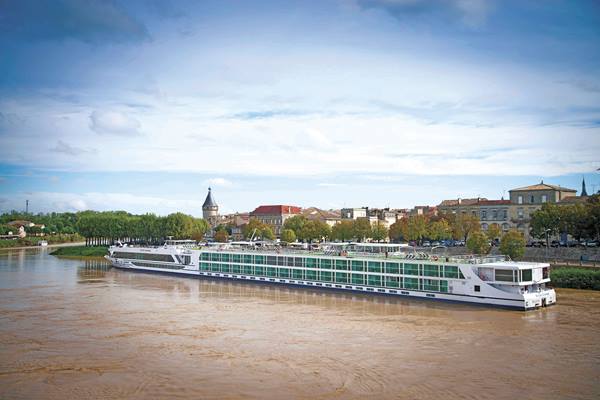 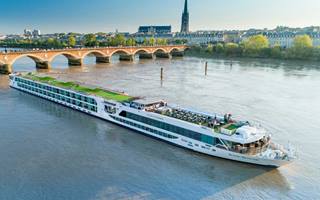 Sailing the South of France on board Scenic Sapphire

Our Scenic Sapphire Space-Ships is the most spacious and innovative on the Rhône, elevating the luxury experience to a level not yet seen on these waters.

As part of our design overhaul we’ve opened up public spaces and added new innovative features, including a Salt Therapy Lounge to enhance our exquisite Wellness Area, the first of its type to grace the waters of France. To help you make better use of the Rhône’s warm, semi-Mediterranean climate, we’ve added a Vitality Pool to the Sun Deck, so you can enjoy a soothing dip as the timeless landscapes of Provence pass you by or unwind in the new larger gym.

One of the most exciting new additions to our French Space-Ships is Scenic Culinaire, an innovative cookery experience which lets you try your hand at perfecting classic French flavours with the guidance of our expert chefs. In specific destinations on the Rhône, you’ll have the opportunity to shop for local ingredients, before returning to the private cooking emporium to whip up a regional delicacy.

Another highlight of the updated vessel is the all-new one-bedroom Royal Owner's Suites. A first for the Scenic Space-Ship fleet, these huge 47 square metre suites are the biggest ever offered on European waters.

The playground of the rich and famous, Monte Carlo will charm you with its picturesque seaside vistas and stylish architecture. Enjoy all this glamorous Mediterranean port has to offer during a guided tour and visit to the Palace of Monaco, including the Palace State Apartments.

Highly regarded as the global centre for art, fashion and gastronomy, the ‘City of Light’ promises much in the way of exquisite architecture, fine-dining and culture. Allow a local to show you the lesser-known sights, enjoy authentic cuisine at 58 Tour Eiffel or feed your creative side on a visit to the Louvre.

Idyllic Rhône
Marseille to Lyon
On this eight day luxury river cruise along the Rhône River, soak up the beautiful vistas, and enjoy the walking tours in Viviers, Vienne and Lyon.
8 day
From (GBP)
£ 2,695
Discover

Idyllic Rhône with Paris
Nice to Paris
Discover the beauty of the Rhône Valley with a 7 day all-inclusive cruise from Tarascon to Lyon before a 3 night stay in the romantic city of Paris.
11 day
From (GBP)
£ 4,030
Discover